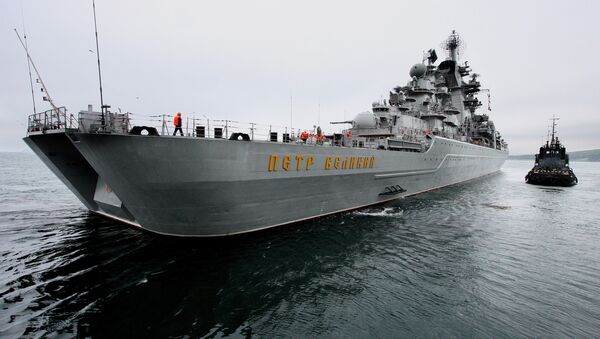 In an exclusive interview with the Russian news network Zvezda, the captain of the Russian heavy nuclear-powered cruiser Pyotr Veliky ran through the warship's unique characteristics.

Speaking to the Russian news network Zvezda, Vladislav Malakhovsky, captain of the nuclear-powered cruiser Pyotr Veliky, heaped praise on the vessel's second to none characteristics.

He specifically drew attention to the fact that the Pyotr Veliky "remains the most powerful missile strike ship in the world."

Another unique feature of the warship pertains to its independent cruising endurance, according to Malakhovsky.

"At full speed, the cruiser can sail round the globe on the equator at least 50 times. In this regard, the ship's independent cruising only depends on food supplies," Malakhovsky said.

A Kirov-class battle cruiser and flagship of the Russian Northern Fleet, the Pyotr Veliky has a displacement of between 24,000 and 26,000 tons, and a speed of up to 31 knots (almost 57 km/h).

The vessel's main weapons include 20 SS-N-19 Shipwreck missiles, designed to engage large surface targets, and air defense is provided by 12 SA-NX-20 Gargoyle launchers with 96 missiles and 2 SA-N-4 Gecko with 44 missiles.

In his article published on the Foxtrot Alpha channel of Jalopnik.com website, defense journalist Tyler Rogoway described the Pyotr Veliky as "a formidable force for any Navy to reckon with."

Production of the missile is expected to be launched in 2017. The Admiral Nakhimov and the Pyotr Veliky nuclear-powered missile cruisers will be the first to receive the new weapons.

Russian Missile Cruiser Marshal Ustinov Back in Service After 5-Year Hiatus
In November 2016, the Russian Defense Ministry said that a Russian naval group, headed by the Admiral Kuznetsov aircraft carrier and Pyotr Veliky had made its way into the Mediterranean, causing quite a stir in the US and EU.

The Russian warships, including the Admiral Kuznetsov, the Pyotr Veliky battle cruiser, and the Severomorsk and Vice-Admiral Kulakov anti-submarine warfare destroyers, were sent to the Mediterranean on October 15.

"The goal of the campaign is to ensure a naval presence in operationally important areas of the oceans," Russia's Defense Ministry said in a statement at the time.