A scientist lifted the veil on the future of artificial neural networks. What will be our place in the world of self-aware programs and what are their "dreams"?

An artificial neural network (ANN) is a high-potential branch of artificial intelligence which is built on the analogy of how human nerve cells (neurons) are interconnected. This type of structure receives feedback from its actions and is thus capable of self-learning: this crucial feature gives scientists hope that ANNs will simulate the way humans think.

"An artificial neural system is an imitation of brainwork, and the difference between humans is that today the network can only imitate. But new-generation networks are exploring the world. And at that time, I think, we have no principal difference between humans and neural networks. They are artificial intelligence," Leonard Johard, PhD and scientific researcher at Innopolis University in Russia, said at the CIPR conference.

The young explorer suggested that ANNs can be implemented areas such as robotics, automatic control vehicles, energy and in industry management.

Johard's opinion about our place in the world once ANNs mature was rather pessimistic as he considers it will be hard for humanity to compete with advanced technologies which use reinforcement learning:

What neural networks need for self-development and becoming better at solving tasks is data.

The scientist presented his forecast for the future of artificial neural networks:

"Our main way to control artificial neural networks will be to control their virtual environment," he concluded.

Games and dreams for programs — just think about it.

The researcher's words about "neural networks spending more of their lifetime dreaming" and gaming might need explanation.

"The games are based on reality and we collect data to create them. But then they [ANNs] will learn in the game most of the time. It's like for children: you have school; you have games for children. So it might be the first 15 years of its life it [ANN] would spend in virtual reality. And then when it goes to actual reality and gets actual data it's already well-prepared," Leonard Johard told Sputnik.

So neural networks "play games" and "see dreams" to adopt and gain knowledge and skills needed for performing their tasks in reality.

They can actually play our computer games (note that it is not a game demo but detached programs playing them).

Another topical issue is whether artificial neural networks can become so brainy that they will finally acquire self-awareness and sense of identity.

"It can reach human behavior if it lives long enough, basically,' Johard said.

He opined that one day ANNs will finally become conscious of their own identity.

"Now we [ANNs] are at the level of simpler animals like worms and ants at the best case. But when it [ANN] gets wiser, it will be able to behave in an intelligent way, it will need to realize that it is an agent in a world, and there are other robots and things it needs to interact with, and then it will start like ‘Okay, I'm different from those, what are my peculiarities', and will begin building its sense of identity. I think it comes naturally. If it continues learning and becomes smart enough, it will understand its identity and its difference from other robots and so on."

But how will neural networks perceive humans?

"Once they have reached our level they will treat us as enemies or brothers, it depends on how we will treat them. But we can control them and educate them to like humans. Whether it will be successful depends on how well we can give them this propaganda. But we program them, and we choose what their goals in life will be," the researcher explained.

"The only thing that is stable is if you search for knowledge. If an agent [ANN] will be looking for knowledge, it will not decay. Those who go into hedonistic perspective will decay," he opined. "In the long run, if you have enough power over your mind, only philosophical motivation will be able to survive."

Swedish national Leonard Johard said Russia has already made good progress in the development of artificial intelligence and neural networks:

"Russian scientists are very competitive and are already in the forefront of artificial intelligence."

He said that to excel in the field, students should have a good mathematical background and be hard working. Johard noted that Russian higher education is recovering from a 30-year-long period of insufficient funding while schools have a good Math program.

"It's all about the will to learn and study hard, and I see it in students here. They are doing great; our alma-mater is as good as any place in Europe," he said about education at Innopolis University (founded in 2012).

Science & Tech
You Don't Hear About It, But 'Digital Wars Are Already Going On'
Johard moved from Sweden two years ago preferring the university because it guaranteed scientific freedom and added that he had studied Russian and noted the two countries' cultural affinity.


Innopolis University, located in Tatarstan, hosted the Information Technology of Industrial Russia (CIPR) IT conference on May 23-26, supported by Rostec State Corporation. The university is regarded as the "intellectual core" of the town that was built built solely for IT technologies and robotics research in 2012. 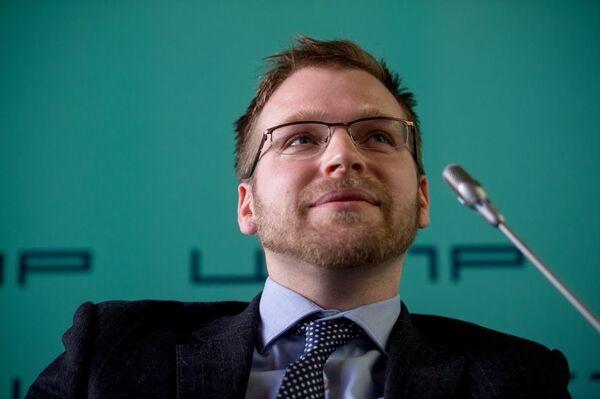