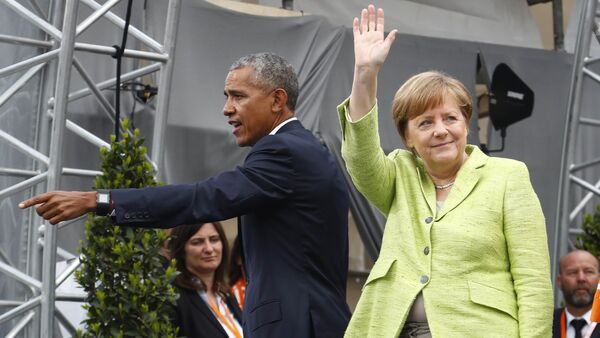 On Thursday, the leaders of NATO member countries met for the first time with President Trump at the NATO summit in Brussels. On the same day, ahead of her trip to Brussels, Angela Merkel met with former US president Barack Obama in Berlin. Polish political analyst Jan Hartman commented to Sputnik on the occasion.

Later in the day the German leader left for Brussels for the NATO summit, where the leaders of the Alliance member states had their first encounter with President Trump.

Sputnik Polska sat down with Polish political analyst, Professor at the Kraków-based Jagiellonian research university Jan Hartman, who explained what the real purpose of Barack Obama's visit was as well as the results of the summit in Brussels.

"There is no conicidence in the timing of the two meetings," he told Sputnik.

"I think that former president Obama is trying to do his utmost to prevent the splitting of the west, to keep the US and Europe pursuing the transatlantic line. Obama has probably tried to convince Merkel that despite the unpredictability of the new US President, the US remains a stable state and  Trump is unable to ruin the long-term political and cultural alliance between the Western Europe and the US, " he told Sputnik. 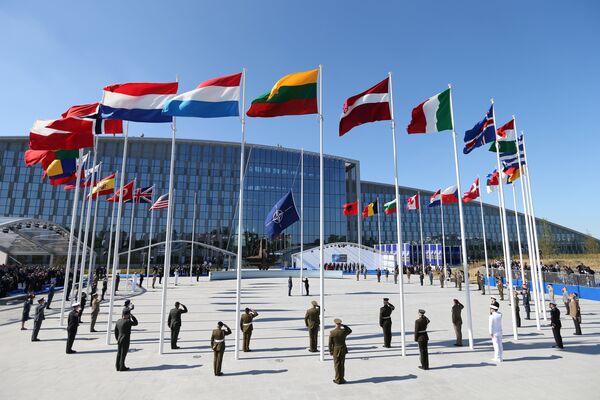 Flags of NATO member countires fly during a ceremony at the new NATO headquarters before the start of a summit in Brussels, Belgium, May 25, 2017
© REUTERS / Christian Hartmann

The political analyst also commented on the speech of the new US President at NATO’s new headquarters in Brussels.

While he has been criticized for being too close to Russia’s President Putin, Trump at NATO mentioned Russia as a possible threat to the Alliance.

Commenting on the announcement of the US leader, Jan Hartman said that the negative comment about Russia by the President who is thought to be an ally of Vladimir Putin is meant to appease the NATO member states as the Alliance perceives Russia as one of its major threats.

However the political analyst further noted that nobody is taking Trump seriously. 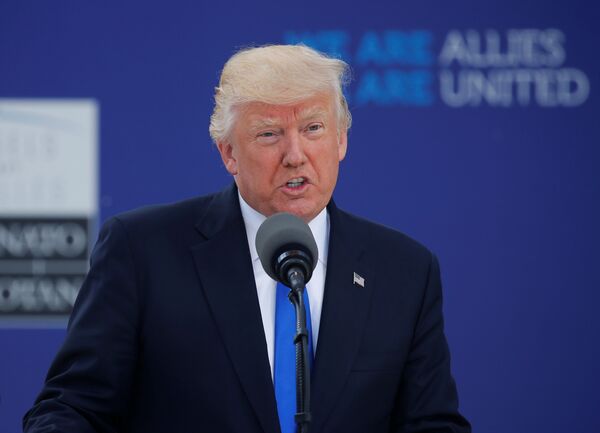 U.S. President Donald Trump speaks at the start of the NATO summit at their new headquarters in Brussels, Belgium, May 25, 2017
© REUTERS / Jonathan Ernst

"Everyone keeps watching could Donald Trump play his role, which he evidently does not fit, equably and foreseeably. And keeps watching whether his impeachment scenario will unfold. Nobody is paying much attention to certain remarks, especially given that the very next day the US leader may express an absolutely opposite opinion," Hartman said.

He also suggested that in the wake of the recent fuss around Trump's alleged connections with Russia and suggested disclosure of certain classified information to the Russian Foreign Minister and Russia's Ambassador to the US, the US President will try to distance himself from Russia in the mainstream media, but it will be his tactics rather than policy.

It will be hard to make any conclusions on the real state of affairs between the US and Russia, he said. The developments in Syria however might become a steppingstone for the rapprochement between the two countries.

NATO Summit in Brussels: Trump Shows 'Who the Boss is in the Alliance'
Jan Hartman also commented on what Donald Trump did not say in Brussels: he did not explicitly endorse NATO’s common defense principle, the Article 5 of the alliance's treaty — that an attack on one is an attack on all.

"NATO does not bear the same meaning to Donald Trump as it did for his predecessors," he told Sputnik.

"This pushes the Europeans to setup their own European armed forces and strengthen their military potential. Nobody seems to believe in NATO as strongly as before. Even if Trump says that the Article 5 still works, it is only too clear that the European countries should not rely on the US that much," he said.

The future of the geopolitical relationship largely depends on the ability of the Western Europe to set up its own coordinated military potential.

However the political analyst further suggested that President Putin will try to prevent further European integration, and military integration as well.

Jan Hartman also suggested that the West wants to stabilize its relationship with Russia and to ease the tensions. President Putin, he suggested, wants the same. Hence, he reiterated, Syria might become a a steppingstone in this process. If there is any cooperation in Syria, it might further improve the relations with Russia.

"The situation is difficult but not hopeless. Neither Trump nor Putin are the leaders which the West has been dreaming of, however there is always hope that the common sense and responsibility for the order in the world will eventually prevail," he concluded.