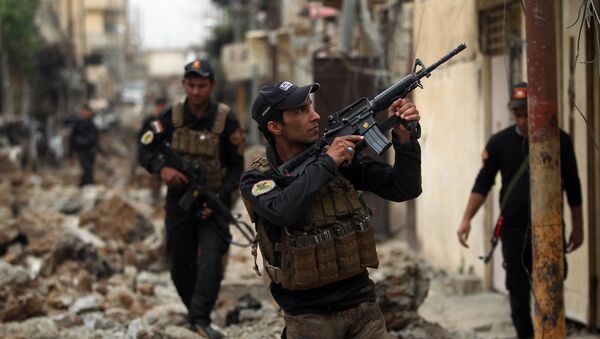 Iraq's forces are storming the last pockets of Daesh resistance in Mosul.

MOSCOW (Sputnik) — The Iraqi Armed Forces are carrying out an operation to liberate last districts of the northern Iraqi city of Mosul remaining under control of Daesh, the Combined Joint Task Force of the Operation Inherent Resolve said Saturday.

Like a Rat: Daesh Leader al-Baghdadi Flees Mosul as Terrorists are Liquidated
The city of Mosul has been occupied by Daesh, outlawed in many countries, including Russia, since June 2014. The operation to retake it began on October 17, 2016 and resulted in the liberation of Mosul’s eastern part this January, but fighting continues in the city's western areas. The operation to liberate it started on February 19, with Iraqi forces closing in on the Old City.

Daesh had declared a caliphate in the captured territories.