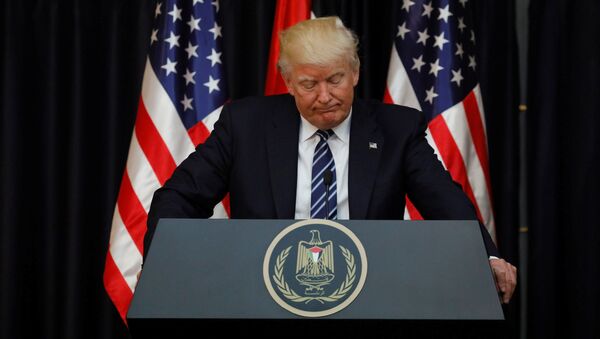 The United States has no plans to ease sanctions against Russia and may even impose stronger more, US President Donald Trump's top economic advisor Gary Cohn told reporters at the G7 summit.

ITALY (Sputnik) — Trump's adviser added that the president wants the sanctions against Russia to remain.

"We’re not lowering our sanctions on Russia. If anything, we would probably look to get tougher on Russia," the official stated.

Trump has underlined that Moscow should change its behavior prior to any talks on the issue, National Economic Council Director Gary Cohn noted.

On Thursday, Cohn told reporters on board Air Force One that the Trump administration did not have a position on Russia sanctions and that the president was looking into this matter. Media reports later speculated that Cohn suggested Trump would look to lift the sanctions.

Trump 'Reaffirms Transatlantic Unity in Holding Russia Accountable' Over Ukraine
During this week's NATO summit, Trump said that the US determined to to maintain transatlantic accord in "holding Russia responsible for its actions" in Ukraine and Crimea.

On February 14, the White House spokesman said that US President Donald Trump expects Russia to "return Crimea" to Ukraine. Later, Trump reaffirmed this stance, suggesDuring the election campaign Trump claimed he would "consider" recognizing Crimea as part of Russia following the referendum in the peninsula, adding that the Crimeans wanted to live in Russia.

Tillerson Says About Conditions for Russia's Return to G8
The US-Russian relations have worsened since 2014 against the background of the Ukrainian crisis and Crimea's reunification with Russia. The United States and its allies in Europe imposed several rounds of sanctions against Russia, blaming Moscow for interfering in Ukraine's internal crisis. In addition, Washington accused Kremlin of meddling in the 2016 US election.