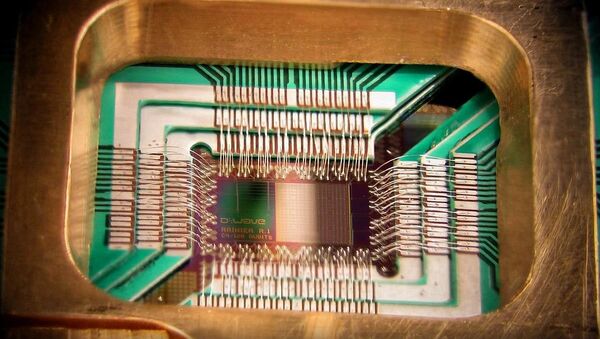 © Photo : D-Wave Systems, Inc.
Subscribe
International
India
Africa
Quantum computers are experimental devices promising to be far faster than traditional devices. While promoted for some time as a panacea for common computer drawbacks and problems, a true quantum device has proved elusive – until now, thanks to the work of a team of researchers from MIT, Harvard University, and Sandia National Laboratories.

In theory, quantum computers will be most effectively used for factoring large numbers, breaking encryption or searching large databases very quickly. Moreover, quantum computers can read data without even looking at it — measuring a qubit can change its state and affect the outcome, so quantum computers entangle atoms, with one atom always reflecting the state of another.

Since 2010, many companies — including D-Wave — have claimed to offer quantum computers, although there are serious question marks over just how quantum these devices are. At most, such machines typically only use quantum principles in their computing process. Until very recently, the consensus view was fully quantum computers were years away from becoming reality — if at all.

.@Microsoft lags @IBM and @Google in quantum computing. Will an inventive executive help the company catch up? https://t.co/cawnIoWZKJ

​However, researchers at MIT, Harvard University, and Sandia National Laboratories believe they have now cleared one of the most significant hurdles to achieving practical quantum computing.

A perennial problem in the designing such devices is the question of how to read information out of qubits. Diamond defects present a simple solution, because they are natural light emitters — and the light they emit can preserve the superposition of the qubits, meaning they could move quantum information between quantum computing devices. The technique is simpler and more precise than its predecessors.

​Diamond-based quantum computing devices will require the ability to position those defects at precise locations in complex diamond structures, where the defects can function as qubits — and the team's experiments produced defects that were within 50 nanometers of their ideal locations on average.

Diamond defect qubits result from the combination of "vacancies" — locations in the diamond's crystal lattice where there should be a carbon atom but there isn't — and "dopants" — atoms of materials other than carbon that have found their way into the lattice. Together, the pair creates a dopant-vacancy "center" which has free electrons associated with it. The electrons' magnetic orientation constitutes the qubit.

The most-studied diamond defect is the nitrogen-vacancy center, which can maintain superposition longer than any other candidate qubit — but it emits light in a relatively broad spectrum of frequencies, which can lead to inaccuracies in the measurements on which quantum computing relies. The researchers instead used silicon-vacancy centers, which emit light in a very narrow band of frequencies. They don't naturally maintain superposition as well, but cooling them down to temperatures fractions of a degree above absolute zero could solve that.

​To be readable, however, the signals from light-emitting qubits have to be amplified, and it must be possible to direct them and recombine them to perform computations. The team found it easier to etch optical circuits into a diamond and then insert defects in the right places than to create defects at random, and then try to construct optical circuits around them.

Setting to work, the MIT and Harvard researchers stripped a synthetic diamond down until it was a mere 200 nanometers thick, before etching optical cavities into the diamond's surface to increase the brightness of the light emitted by the defects, while shortening the emission times.

They then dispatched the diamond to the Sandia team, who have customized a commercial device called the Nano-Implanter to eject streams of silicon ions. The Sandia researchers fired 20 — 30 silicon ions into each of the optical cavities in the diamond, and sent it back to Cambridge.

The researchers have also developed processes for blasting the diamond with beams of electrons to produce more vacancies, and then heating the diamond to round 1,000 degrees Celsius, causing the vacancies to move around the crystal lattice so they can bond with silicon atoms.

After the researchers had subjected the diamond to these two processes, the yield had increased to 20 percent. Repetitions of these processes should increase the silicon vacancy centers' yields yet further. When the team analyzed the locations of the silicon-vacancy centers, they found they were within about 50 nanometers of their optimal positions at the edge of the cavity, emitting light about 85 to 90 percent as bright as it could be — a very promising result.

In sum, it appears the quantum computing revolution may be close to transcending science-fiction aspirations, and becoming reality.

Research into the field is ongoing the world over, with Russia and the US leading a pack of hopefuls that includes China, Canada, Israel and Japan. Given the UK government's dedication to ending encryption, privacy campaigners will surely be hoping Amber Rudd won't be able to work out how to use one.