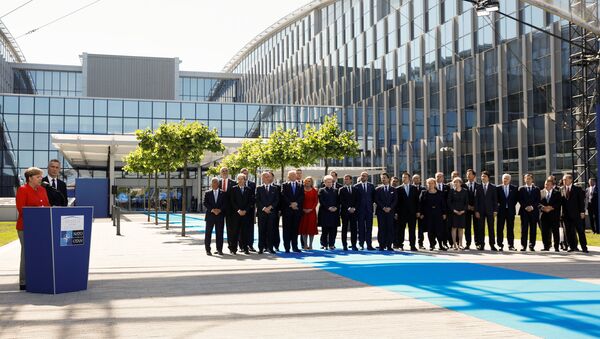 PARIS (Sputnik) — During the NATO summit of heads of states and governments, which took place in Brussels on Thursday, US president Donald Trump criticized member states for "not paying enough" for their own security. The summit decided to implement fairer burden sharing when it comes to financing the alliance.

"It is an enormous effort asked from the nation, which will probably mean cuts in other spheres. We are already struggling with a considerable debt," Goulard told Radio France.

The minister explained that the claim made by US president Donald Trump, who said that European countries do not carry a fair share of spending in NATO, was reasonable.

Trump to Be Tough on NATO Members’ Defense Spending - Tillerson

"It is true that the United States has been for a long time investing in European security. Now 70 percent of the NATO budget comes from the United States. For the French people, who have always fought for autonomous European defense, that is also a positive evolution, because it will probably make certain countries who were reluctant to invest in NATO make a decision beneficial for us," the defense minister said.

Goulard added that France is an important guarantee of European security, but needs to work together with other European countries in order to counter newly emerging threats.

"We are facing the new threat, which is terrorism, but also cyberattacks, and this is a vast field on which we can see European cooperation evolve in all its forms of action, bilaterally with the Germans, trilateral, multilateral talks with another states. I have absolutely no intention to desert the European corner," Goulard noted.

000000
Popular comments
The only threat France faces is economic meltdown if they are required to pay back their debts(around 13+Trillion)which they cannot ever.So of course they are panicking,otherwise they will have to extract even more from their already suffering former African colonies which they will not be able to do.Where else will the money come from?They really do not produce much apart from luxury goods and foods/wine.The rest is window dressing.Time for the French to start working like the rest of the globe.