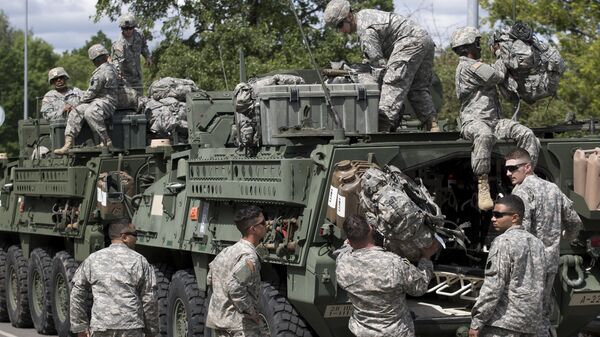 "The US administration has submitted its budget request to Congress, which entails a boost in spending on the European Reassurance Initiative. In fiscal year 2018, which starts on October 1 2017, the Pentagon plans to spend $4.8 billion on countering Russia. A total of $3.4 billion were allocated for this purpose this year," he said.

Khrolenko added that Trump's budget proposal for defense also asks for $65 billion to fund Washington's overseas military engagements. In addition, the White House want to increase the US Armed Force by an additional 56,000 troops.

Pentagon Dusts Off Old Trick to 'Sow Discord' in Russia
"Apart from this, the Pentagon has employed instructors to teach a special forces group within the US National Guard 'Russian military terminology,' as well as history, culture, traditions and customs of the Russian people. These courses are planned five years ahead," the analyst said. "Earlier, a German company was looking for Russian-speaking extras for the US Army's war-games in a bid to better prepare US service personnel for overseas missions."

"One gets an impression that the US special forces, equipped with new assets and having received additional funds, are getting ready to carry out missions deep in Russian territory," the analyst observed.

Earlier, media reports suggested that the US Army was looking for a contractor to provide Russian language courses to the United States National Guard at a facility in Birmingham, Alabama. The courses are supposedly expected to last from three to six weeks.

'Jam the Russians': US to Test Latest Electronic Warfare Gear in Europe
The US Department of the Army published a solicitation titled "Central/South American Spanish, Russian, French and Arabic Languages" on the Federal Business Opportunities website on May 17, which was canceled less than 24 hours later.

Some of the objectives listed in the solicitation included teaching the students military terminology and the practical application of command terms. In addition, instructors were supposed to provide an overview of regional cultural awareness, including important dates and personalities.

The US Department of the Army, according to RT, has already found a contractor to carry out this program.