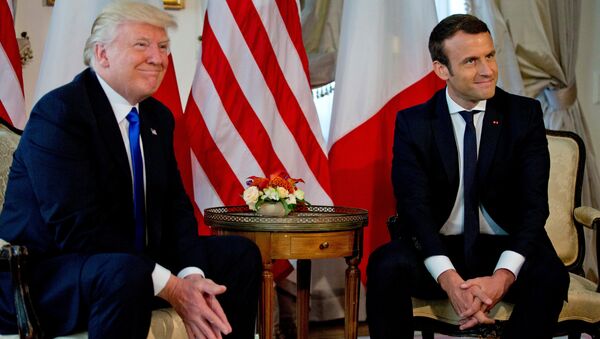 © REUTERS / Peter Dejong
Subscribe
US President Donald Trump attends his first NATO summit in Brussels, May 25 to call for all alliance members to pay their way and to give support to NATO formally joining the anti-Daesh coalition, as it puts more resources into counterterrorism.

Trump caused consternation when — in the presidential election run-up — he declared NATO "obsolete" and said that countries which did not pay their way would not get as much support from other alliance members that did. NATO has set a target that each member should spend two percent of GDP on defense.

However, he is likely to show support for the organization — especially after NATO Secretary General Jens Stoltenberg said he would support is calls for all member states to step up to the mark on defense spending and cooperation.

​"Today, we will adopt an action plan to enhance NATO's contributions. Our largest military operation ever was launched in Afghanistan in a direct response to the 9/11 terrorist attacks on the United States. 13,000 NATO troops continue to train Afghan forces," Stoltenberg told reporters, May 25, ahead of the summit.

"We will assess our level of support and the future of the mission. Training local forces is one of the best weapons in the fight against terrorism. We are already training Iraqi forces. And our AWACS surveillance planes provide information to the Global Coalition to Defeat ISIS [Daesh]," he said.

"We will now establish a new intelligence fusion cell at the headquarters addressing terrorism, including foreign fighters. And we will also appoint a special coordinator for NATO's efforts fighting terrorism. So this is both a strong political message of unity in the fight against terrorism, but also a part of an Action Plan where we are providing more practical support to the efforts fighting global terrorism, including addressing our mission in Afghanistan." 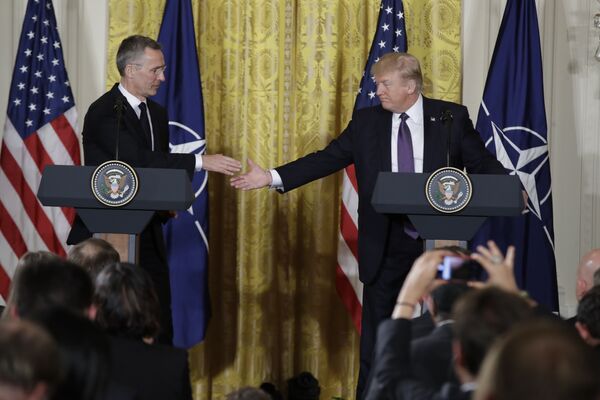 Stoltenberg said the second item of the agenda — which will deliberately play into Trump's hands — will be the finances of NATO.

He said that NATO will push to spread the burden — resources and financial — across all member states so that the US — as Trump has repeatedly said — does not have to be relied upon so heavily in the future.

000000
Popular comments
This is the visit that Sputnik said was unimportant? It said it was only for five religions and a fluff visit to get Trump away from problems. How ridiculous!! Trump is meeting all of the crucial players on his first visit. What does Sputnik want, other than for Trump to resign in disgrace?
stop the NATO wars
25 May 2017, 16:54 GMT
000000
"NATO remains essential" for "global peace and security." - @JustinTrudeau #NATOMeeting 7:36 AM - 25 May 2017 -- LOL!!!
stop the NATO wars
25 May 2017, 16:55 GMT
000000
Newsfeed
0
New firstOld first
loader
LIVE
Заголовок открываемого материала
Access to the chat has been blocked for violating the rules . You will be able to participate again through:∞. If you do not agree with the blocking, please use the feedback form
The discussion is closed. You can participate in the discussion within 24 hours after the publication of the article.
To participate in the discussion
log in or register
loader
Chats
Заголовок открываемого материала
Worldwide
InternationalEnglishEnglishMundoEspañolSpanish
Europe
DeutschlandDeutschGermanFranceFrançaisFrenchΕλλάδαΕλληνικάGreekItaliaItalianoItalianČeská republikaČeštinaCzechPolskaPolskiPolishСрбиjаСрпскиSerbianLatvijaLatviešuLatvianLietuvaLietuviųLithuanianMoldovaMoldoveneascăMoldavianБеларусьБеларускiBelarusian
Transcaucasia
ԱրմենիաՀայերենArmenianАҧсныАҧсышәалаAbkhazХуссар ИрыстонИронауОssetianსაქართველოქართულიGeorgianAzərbaycanАzərbaycancaAzerbaijani
Middle East
Sputnik عربيArabicArabicTürkiyeTürkçeTurkishSputnik ایرانPersianPersianSputnik افغانستانDariDari
Central Asia
ҚазақстанҚазақ тіліKazakhКыргызстанКыргызчаKyrgyzOʻzbekistonЎзбекчаUzbekТоҷикистонТоҷикӣTajik
East & Southeast Asia
Việt NamTiếng ViệtVietnamese日本日本語Japanese中国中文Chinese
South America
BrasilPortuguêsPortuguese
NewsfeedBreaking
14:13 GMTIndian Minister Claims to Have Received 'Threats' After Targeting Drug Agency's Regional Chief
14:13 GMTPfizer Says COVID-19 Vaccine Over 90% Effective in Children
14:07 GMTEx-Pentagon Official Accuses Military of Spreading Misinfo to Make US ‘Look Stronger Than We Are’
14:02 GMTGermany: Iraqi Airlines May Face Sanctions if Carry Potential Refugees From Minsk to EU
13:58 GMTCharity Opens Clandestine Online School for Afghan Girls, Reports Say
13:54 GMTLove Triangle in Animal Kingdom? Two Giraffes Fight Over a Female and They Got Moves
13:49 GMTSpoilt Ronaldo Ignored Rules of Humility & Equality in Juventus Dressing Room, Report Claims
13:46 GMTTwo UK Teenagers Arrested Over Hypodermic Needle Spikings In Nottingham Nightclubs
13:42 GMTPence Visits In-N-Out Burger in California as Chain Refuses to Ask Customers' Vaccination Status
13:41 GMTREC: 5,000 Companies Join ‘Single Window’ System
13:39 GMT'Squid Game' Fame Used by Drug Dealers to Peddle Ecstasy Pills to Kids, Parents Warn
13:31 GMTPub Asks Newcastle United FC Fans to Refrain From Wearing Arab-style Clothing After Saudi Takeover
13:28 GMTPolitical Parties Used Fake Facebook Accounts to Influence Delhi State Polls, Says Whistleblower
13:26 GMT'Why Was I Handed a Hot Gun?' Alec Baldwin Said After Shooting Cinematographer, Witness Claims
13:16 GMTBiden Repeats Contentious Claim That His Multi-Trillion Dollar Spending Plan Will Cost Nothing
12:52 GMTProsecutors Hoping For Convictions in Campaign Finance Case Against Ex-Giuliani Associate Lev Parnas
12:46 GMTEgyptian Exhibit Near Pyramids Denies Detention of Humanoid Artist Ai-Da
12:46 GMTInvestigation Confirms No Fraud in Bolivian 2019 Presidential Election, Foreign Minister Says
12:45 GMTTashkent Says No Need to Deploy US Troops in Uzbekistan
12:41 GMTUS State Secretary Blinken 'Met With Colombia Embassy Staff Hit With Havana Syndrome'