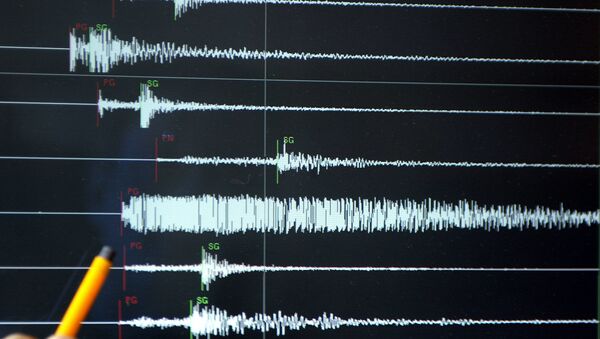 © AFP 2023 / Richter magnitude scale
Subscribe
International
India
Africa
California scientists are saying that a massive earthquake is certain to happen on the US West Coast, it's only a matter of when. They are urging the public to resist being paralyzed by fear and instead get informed and motivated to protect themselves, their families and their property.

There are already cities in the Golden State requiring that vulnerable buildings be retrofitted, and next year scientists with the US Geological Society are set to reveal the first stage of an early warning system for earthquakes that would notify people of an incoming tremor through their personal electronic devices.

In a recent speech to the Japan Geoscience Union and American Geophysical Union, seismologist Lucy Jones said there needs to be fundamental change in the way experts communicate to the public about earthquakes.

Jones reasoned that the usual vague analysis that estimates the probability of a quake striking sometime over the course of a few decades leads to a public that’s largely complacent and passive about earthquakes, ultimately leaving them unprepared for the inevitable.

She pointed to the preparedness of Chinese officials, who ordered evacuations ahead of a 7.3 magnitude temblor in 1975, predicted by way of the 500 “foreshocks” they sensed before the massive quake occurred.

"The prediction did not happen because the Chinese knew more than we do about foreshocks," Jones said, according to the Los Angeles Times. "They used the basic principle … quantified more than a century ago: One earthquake makes another earthquake more likely, and guessed that having a swarm of over 500 events made a big earthquake even more likely."

She explained that risking a false alarm was much less dangerous than allowing people to remain in buildings not equipped to withstand earthquakes.

California has missed the mark on this before. Scientists projected a 95 percent chance that a magnitude 6.0 earthquake would hit between 1988 and 1993, but the next quake did not come until 2004.

Jones emphasized that reporting the probability of a temblor striking in the future doesn’t make people safer. For her, the solutions is for scientists to communicate what they are sure of, rather than what they are unsure of.

She suggested informing property owners who would be responsible for costs associated with retrofitting – or repairing or replacing fallen buildings.

She said, "By emphasizing the financial aspects, I moved people away from fear that can paralyze decision-making … I showed them that they were going to have to pay for the earthquake, one way or another. Either now or after it happens. It was just a matter of when."

Jones also emphasized the importance of community, saying that one collapsed building often affects another. "Someone’s decision not to be ready increases the chances that others will suffer," she said.

In 2015, this led to Los Angeles passing the most wide-ranging retrofitting laws in the nation.

She told the scientists, "Remember that society wants our help, needs our help to save people’s lives and their livelihoods.

"As a scientific community, I believe we should, as a moral duty, be fostering the creation of information that can be used to make a safer society."