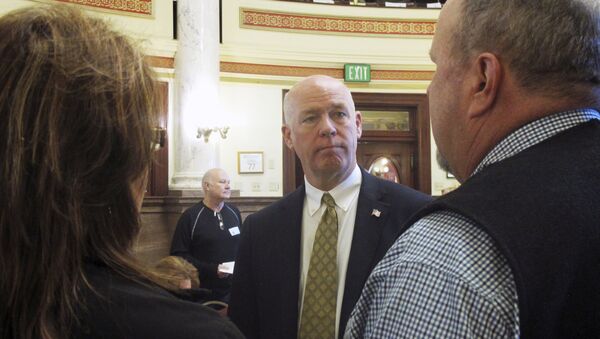 One day after being charged with assaulting a journalist, Republican House candidate Greg Gianforte lost the endorsements of three Montana newspapers ahead of Thursday’s special election.

“We’re at a loss for words,” the Billings Gazette began. “And as people who wrangle words on a by-the-minute basis, that doesn’t happen often.”

The Independent Record stated succinctly: “Democracy cannot exist without a free press, and both concepts are under attack by Republican US House Candidate Greg Gianforte.”

The Republican “violated that pledge [to uphold Montana values] when he attacked a reporter for doing his job Wednesday night,” the Missoulian wrote.

Audio of the altercation indicated that the assault followed Jacobs pressing Gianforte on the Congressional Budget Office score of House Republicans’ American Health Care Act, and how it impacted the Montana House of Representatives candidate’s stance on the party’s desperate attempts to repeal and replace former US President Barack Obama’s Affordable Care Act.

The CBO forecasts 23 million people would go uninsured as a result of the "replacement" package. Republican "fixes" to the legislation left 1 million fewer uninsured than earlier versions, according to previous analyses.

“We are also sick and tired,” the Independent Record’s retraction stated, “of Gianforte’s incessant attacks on the free press. In the past, he has encouraged his supporters to boycott certain newspapers, singled out a reporter in a room to point out that he was outnumbered, and even made a joke out of the notion of choking a news writer, and these are not things we can continue to brush off.”

“Get the hell out of here,” Gianforte exclaimed during the scuffle with Jacobs, after being pressed on health care. “I’m sick and tired of you guys.”

Hardly the behavior of someone aiming to be primetime all the time as a member of Congress.