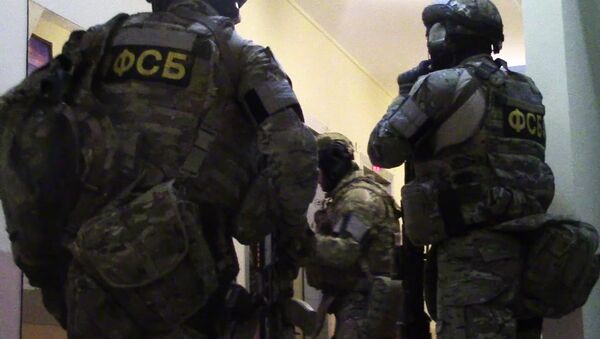 According to the FSB, those detained are the citizens of Russia and Central Asian states.

"The FSB detained in Moscow on May 25, 2017, four members of a terrorist group consisting of citizens of Russia and countries of the Central Asian region have been preparing terrorist attacks using improvised explosive devices at Moscow's transport infrastructure," the FSB said.

Russia's FSB Reveals Secret Chats in Telegram Used By Terrorists
According to the security service, the group is led by Daesh terrorists.

Those detained reportedly planned to travel to Syria to take part in the fighting alongside Daesh after committing a terrorist attack in Russia.

"The terrorists planned to travel to Syria after committing a sabotage and terrorist attack to take part in hostilities as part of Daesh international terrorist group," the FSB said.

A bomb-making laboratory and ready-to-use explosive devices have been found during the detention of the four suspected terrorists, the FSB said.

"As a result of search activities conducted at the detainees' addresses, a laboratory for the production of explosives, an improvised explosive device with projectiles and components for its manufacture were uncovered."

Automatic firearms, ammunition, grenades as well as extremist and terrorist literature and video were also found during the arrest, the service added.