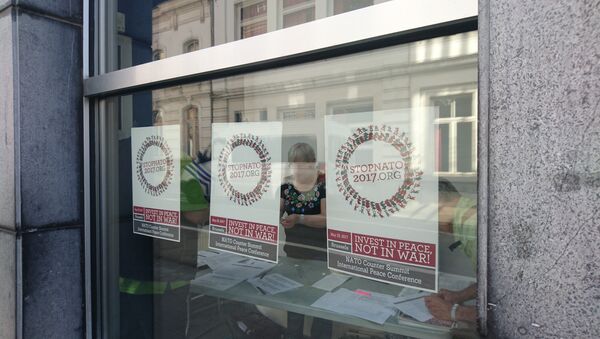 © Sputnik / Denis Bolotski
Subscribe
As US President Donald Trump, in Belgium to take part in the annual NATO meeting, wants his fellow leaders to increase military spending, organizers of a parallel counter-summit are demanding just the opposite. Some peace activists even put their lives at risk to deliver the message.

The thrum of police helicopters and the spectacle of armored vehicles parked in front of sidewalk cafés, where you'd more expect to see delivery trucks — it was an unusual combination of sights and sounds witnessed by thousands of people in Brussels on May 25. Local joggers had to change their routes and tourists were baffled by the city's sudden war zone-like appearance.

It seems that the tight security measures were put in place to ensure the comfort and safety of one man — Trump.

But Trump may have had something of an unpleasant surprise early in the morning.

Belgian Greenpeace activists climbed on top of a construction crane near the US diplomatic compound, to greet America's commander-in-chief with a huge yellow "Resist" banner.

For many of the 28 NATO leaders, the Belgium summit was their first chance to talk to Trump in person. The organizers of the summit did their best to impress the US president and to show their hospitality. For the first time, the meeting was held in the newly built $1.2 billion alliance headquarters near the Brussels airport.

Authorities restricted all civilian access to streets and highways around the NATO compound, but even that didn't stop peace activists from attempting to disrupt the high-level meeting. Dozens of people were arrested for blocking nearby intersections and hanging anti-NATO posters along the highway.

The protests were part of the traditional counter-summit, held annually right next to NATO's main event. Besides direct protest, the counter-summit is a great chance for activists from all over the world to share their views and voice their concerns.

This year's NATO summit seemed to have one big topic on the agenda, raised by President Trump: the alliance's finances. The US wants each NATO country to spend at least 2 percent of its annual GDP on defense, but the majority are not doing that. Belgium's own military spending, for instance, is lower than 1 percent of GDP.

But even that, according to peace activists, is too much.

Ludo de Brabander, one of the counter-summit organizers, told Sputnik there are better uses for taxpayers' euros.

"This is something we think is absurd. We need this money in countries and territories where the poverty line is 18 percent — just to give an example, and this is where the money should go to, and not to arms and armies."

Reiner Braun, co-chairman of the International Peace Bureau, said that war and militarization will not solve the world's problems. He's certain that nations should stop spending money on tanks and drones, and invest at least 10 percent annually into civil and societal projects.

When it comes to security, Braun says it's important to stop military confrontation with other countries, such as Russia.

"We have to come back to politics of common security, to the politics, which is inclusive, which will include all European countries," Braun said. "And NATO is exclusive — it excludes what they call ‘the enemy' — in this case, it excludes Russia. Exclusive politics is a wrong way to go."

Many of the NATO member states are experiencing economic hardship at home, and it's unclear whether they will be able to fulfill Trump's request and spend more money on arms and armies. So the anti-NATO activists say that now may be just the right moment for world leaders to rethink their strategy and to make a u-turn from the policy of war to one of disarmament and peace.