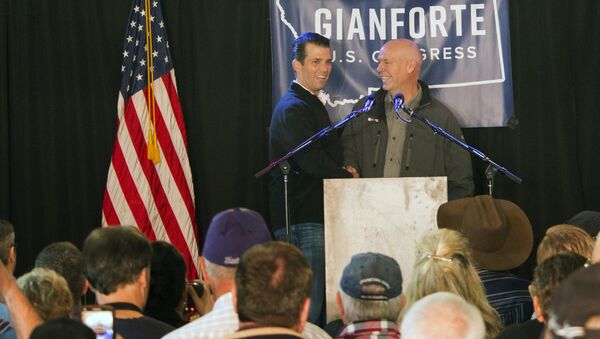 © AP Photo / Bobby Caina Calvan, File
Subscribe
Grant Ferowich
All materials
One day before a US Congress special election in Montana, GOP candidate Greg Gianforte physically assaulted Guardian reporter Ben Jacobs. He “body slammed me and broke my glasses,” Jacobs said as he left the scene of the sudden attack.

“Wanted to wait a bit to tweet because I’m not sure I’ve seen anything like this before,” said BuzzFeed reporter Alexis Levinson, who is on the scene in Montana. According to her account, Jacobs walked into a room where the candidate was meeting with a local TV station. Loud yelling ensued, and Jacobs walked out shortly after with broken glasses, telling her he had been hit.

​In an audio recording of the altercation, Gianforte can be heard becoming infuriated by questions about the Republican health care bill, which will kill coverage for millions of Americans and could unravel the stability of several state marketplace exchanges.

The journalist calmly asked about whether the Congressional Budget Office score would change where Gianforte stands on health care, as the candidate previously said he would wait for the report to come out. “We’ll talk to you about that later,” Gianforte interrupted.

After telling the reporter to speak with one of his staffers, an altercation appears to have broken out, and it sounds like Jacobs’ glasses hit the floor. “I’m sick and tired of you guys,” an audibly angry Gianforte scolds. “Get the hell out of here,” he said.

“You’d like me to get the hell out of here; I’d like to call the police,” Jacobs replied.

Afterword, Jacobs texted fellow reporters indicating this was not a joke.

Police and emergency medical personnel were summoned, and Gianforte left the event before speaking, more than an hour before the event was scheduled to end, according to reports.

​Medics with an ambulance checked out Jacobs after he was assaulted.

​Fellow journalists urged Jacobs to press charges, while many others publicly expressed concern for his safety.

President Donald Trump carried Montana easily in the 2016 presidential election, by more than 20 points. But the president’s lack of legislative victories, continued speculation over scandals surrounding his administration and the removal of ex-FBI Director James Comey have coincided with a downward spiral in Trump’s approval ratings.

“This race is closer than it should be,” Politico recently reported.

​Last week, an award-winning journalist was manhandled inside a government Federal Communications building for asking a question.

000000
Popular comments
Good for candidate Gianforte. I hope he did not bruise his knuckles.