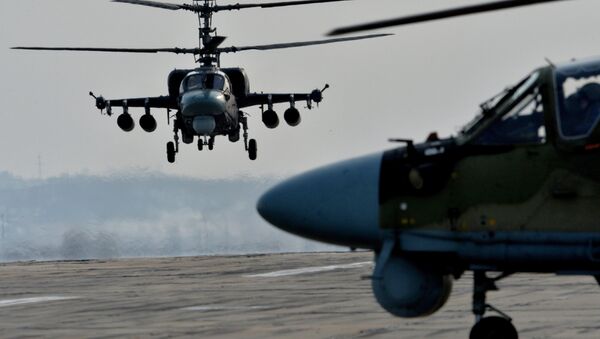 Russian Ka-52 "Alligator" attack helicopters will get a new guidance system for artillery armament which has been developed with the use of "space" technology, the Russian Space Systems company said.

The system meets the standards for rocket and space technology equipment.

"The Russian Space Systems is developing a new guidance system for artillery armament of the strike-reconnaissance combat Ka-52 'Alligator' helicopter in the framework of cooperation with the Russian Helicopters company. When creating a measurement system for the helicopter's artillery complex,… specialists used the groundwork of the rocket and space technology," the company's press service said.

"In terms of reliability and accuracy, all equipment offered to the Russian helicopter industry fully meets the requirements for products installed on space vehicles and launch vehicles."

Home of Russian Alligators: The Place Where Ka-52 Attack Helicopters Are Built
The system is set to provide a significant increase in the accuracy of hit precision due to a target indication unit, which is part of the gun control system.

This will allow the helicopter's gun to provide the necessary accuracy at high speeds, in conditions of severe vibration and when the helicopter or its target moves.

Russia's Ka-52 Alligator is designed to destroy tanks, other armored vehicles, as well as helicopters and low-speed enemy aircraft. The Ka-52 could also perform fire support operations, as well as patrol and escort missions. It can also detect various objects, mobile and stationary ground targets.

In November 2016, Russian Helicopters holding Deputy CEO for Aftersales Service Igor Chechikov said that the first batch of Ka-52 helicopters manufactured for foreign purchasers would be ready for delivery in 2017.