20 Aircraft to Take Part in NATO Drills in Estonia 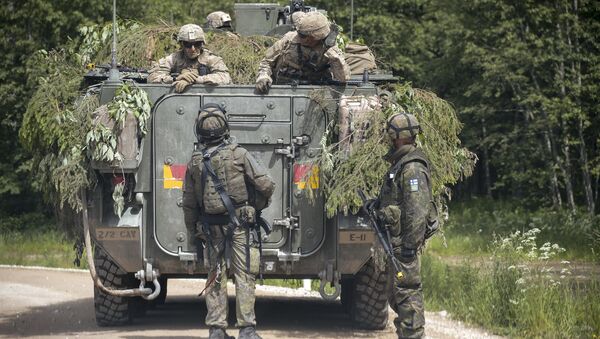 NATO Drills in Estonia: Vehicle Catches Fire Leaving Two Servicemen Injured
TALLINN (Sputnik) – A total of 20 planes and helicopters are participating in the NATO Spring Storm military drills being held on May 8-26 in Estonia, the Headquarters of the Estonian Defense Forces said Wednesday.

"A total of 20 planes and helicopters take part in the ‘Spring Storm’ exercise. In addition, some unmanned aerial vehicles are operating in the airspace. More than half of the aircraft may be in the sky simultaneously during the most intensive exercises. They provide air support, conduct reconnaissance and fulfill tasks on transporting people and equipment," the statement said.

The 15th "Spring Storm" military drills involve almost 9,000 servicemen from 15 states, including the host country. Namely, over 800 UK servicemen, up to 300 French and some 400 German soldiers arrived in Estonia to take part in the drills along with the troops from the United States, Latvia, Lithuania, the Netherlands, Belgium, Poland, Canada, Finland, Ukraine, Spain and Georgia.

Polish Su-22 fighters, Spanish F-18 Hornet jet fighters, US AH-64 Apache attack helicopters and UH-60 Black Hawk multi-role helicopters, as well as Estonian L-39 training jets and Robinson R-44 helicopters are engaged in the drills. The Polish and Spanish aircraft carry out patrolling missions in the sky over the Baltic states and are deployed at Estonia’s Amari air base.

NATO members have been ensuring airspace defense over the Baltic states ever since their joining the alliance in April 2004, as none of the newer members possess the aircraft necessary to conduct their patrols. The mission was prolonged for an indefinite period of time at the 2012 NATO summit in Chicago.