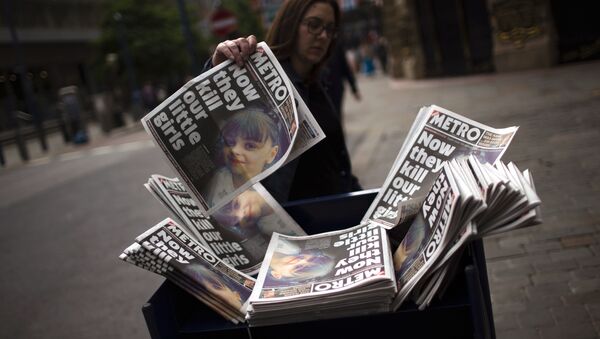 The publication of leaked images of the Manchester Arena crime scene and evidence collected there could threaten the integrity of the UK’s active counterterrorism investigation into the horrific suicide bombing attack outside an Ariana Grande concert on Monday night, British police said.

UK Man's Dash Cam Reportedly Captured Explosion at Manchester Arena (WATCH)
On Wednesday, the New York Times published photographs taken by law enforcement of the Manchester Arena attack aftermath, including the explosive’s potential detonator, shrapnel and power source. The US media has also already published the name of the suspected bomber, despite the objections of UK police.

UK officials are "furious" about the photo leak, the Independent reported, and the anger appears to reach the highest levels of government. Several British newspapers say UK Prime Minister Theresa May will confront US President Donald Trump about the leaks at the NATO summit on Thursday.

​The UK home secretary, Amber Rudd, made "very clear" to US authorities only hours before the latest leak that they were not to release information on the investigation to the media, the Telegraph pointed out. "This issue is being raised at every relevant level by the British authorities with their US counterparts," Rudd said Wednesday, admitting the premature publication of suspect Salman Abedi’s name left her "irritated."

Trump himself has expressed outrage at the "LEAKERS" in his own government.

​"This is completely unacceptable," an unnamed official said Wednesday, according to the Guardian, pointing to the trauma such images might inflict on victims, families and the public at large.

By publishing images from the scene of the crime, those relationships are jeopardized, police said.

"When that trust is breached it undermines these relationships, and undermines our investigations and the confidence of victims, witnesses and their families. This damage is even greater when it involves unauthorised disclosure of potential evidence in the middle of a major counter terrorism investigation."

May on Tuesday elevated the nation’s threat expectation to the highest possible, "critical," and added that a second attack could be "imminent," Sputnik reported.

The Times has relied on anonymous sources for some of its most scandalous reporting, and has received flak for doing so. Fellow legacy news outlet the Washington Post has also tripped up in recent months by publishing reports that turned out to be "fake news."