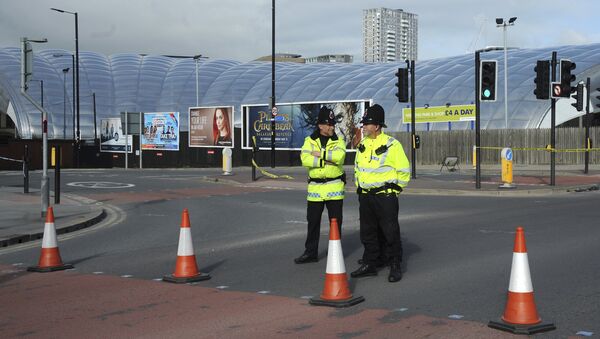 British Interior Minister Ember Rudd said that the suspect believed to be the perpetrator of the Manchester terrorist attack, Salman Abedi, was known to the intelligence services prior to the bombing.

A deadly blast occurred outside the Manchester Arena at the end of US singer Ariana Grande's concert on Monday night, leaving at least 22 people dead and over 120 injured. Daesh, which is outlawed in Russia, has reportedly claimed responsibility for the attack.

Earlier, British Prime Minister Teresa May stated that she did not rule out that there was a "group of persons" behind the terrorist attack in Manchester, and not just a single person born in this city.The home secretary did not specify what that knowledge constituted, but praised the work of the UK intelligence services.

Rudd also told the BBC television channel that Abedi was likely to act with accomplices.

"It seems likely possible that he wasn't doing this on his own," Rudd told the BBC broadcaster.

Foreign media leaks of Monday's Manchester attack investigation were "irritating" and UK allies have been asked not to allow this to happen in the future, Rudd added.

She told the BBC broadcaster that she had been "clear with [UK] friends" that leaks should not happen again.

Some information about Monday's Manchester Arena attack appeared in the US media before it was released to their UK colleagues by local police.

The UK Home Secretary also stated that as many as 3,800 soldiers will be deployed on the UK streets following the recent attack in Manchester.

" It's up to 3,800 [soldiers]," Rudd told the BBC broadcaster, when asked how many soldiers would be deployed.

The home secretary added that the police would decide on additional details of the deployment of the military personnel.