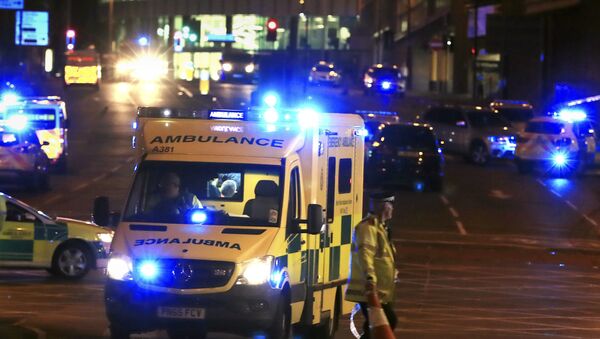 UK emergency services said a total of 59 people were hospitalized after the huge explosion that rocked the Manchester Arena on Monday night, killing at least 19 people.

MOSCOW (Sputnik) — Fifty-nine people injured in the explosion outside the Manchester Arena were taken to various hospitals, while a number of others were treated on site, the North West Ambulance Service (NWAS) NHS Trust said Tuesday.

US London Embassy 'Closely Monitoring' Manchester Attack, Stands Ready to Assist
​"NWAS has taken 59 casualties from the Manchester Arena incident to various hospitals & treated a number of walking wounded on scene," the ambulance service said on its Twitter.

The blast occurred on Monday night at the end of the concert of US singer Ariana Grande, leaving at least 19 people dead. The police are treating the explosion as a terrorist attack at the moment.