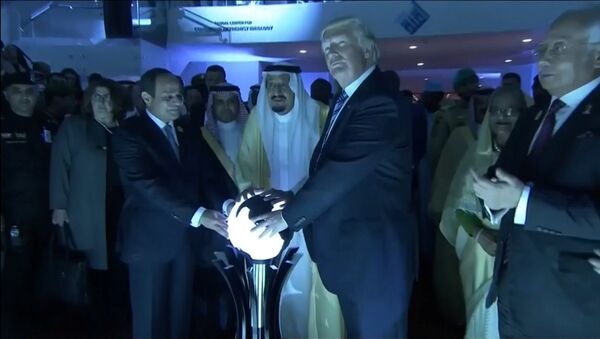 US President Trump's visit to Saudi Arabia has indicated that the United States has returned to its traditional unconditional support for Riyadh, which could ultimately set off World War III, analysts told Sputnik.

WASHINGTON (Sputnik) — President Donald Trump made clear at the US-Sunni Arab summit in Riyadh on Sunday that he is returning US policy to its traditional unconditional support for the Kingdom of Saudi Arabia.

"The whole visit means that US policy is simply reverting to that which prevailed under [President George] H. W. Bush: US-KSA [Kingdom of Saudi Arabia] solidarity, no questions asked and lots of orders for the US defense sector," retired United Kingdom diplomat Jonathan Clarke said on Monday.

Trump’s speech in Riyadh amounted to a repudiation of former US policies to try and spread democratic values in Saudi Arabia and other Middle East nations pursued by Presidents George W. Bush and Barack Obama, Clarke maintained.

"It marks the abandonment of the process started in 2005 with [then-Secretary of State Condoleezza] Rice’s speech at American University Cairo and continued under Obama to break out of the policy straitjacket. It’s a reversion to the norm," Clarke said.

Trump's Mideast Tour Paves the Way for War With Iran, Ex-CIA Official Warns
University of Illinois Professor of Law Francis Boyle agreed that Trump was reverted to traditional US support for Saudi Arabia seeking to regain more access to its oil wealth.

Moreover, Boyle noted that Trump is just another promoter of US imperialism all over the world.

"Trump forthrightly and proudly admitted that the United States is in the Middle East in order to steal their oil. At least he was honest about it. Unlike his predecessors," he stated.

However, Boyle warned that this reversion to traditional US policy in the region could provoke reactions that might set off a global conflagration.

Trump in Riyadh: President Managed to Create Unified Front With Key Arab Allies
By exploiting the events of September 11, 2001, the George W. Bush administration had attempted to steal a hydrocarbon empire from the Muslim states and peoples of Central Asia, the Persian Gulf and Africa under the bogus pretexts of fighting a war against international terrorism, Boyle explaiend.

"The geopolitical stakes are infinitely greater than they were a century ago: control and domination of two-thirds of the world’s hydrocarbon resources and thus the very fundamental and energizer of the global economic system — oil and gas," he said.

The George W. Bush and Obama administrations had targeted the remaining hydrocarbon reserves of Africa, Latin America, and Southeast Asia for further conquest or domination, together with the strategic choke-points at sea and on land required for their transportation, Boyle concluded.