It's Time to Tighten Belts: Trump's Budget Seeks Cuts to Everything But War 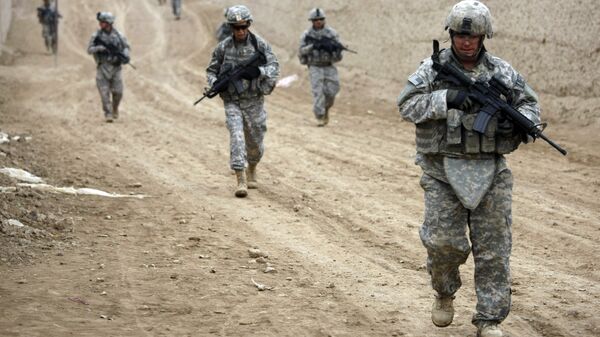 © AP Photo / Dario Lopez-Mills
Subscribe
International
India
Africa
Donald Trump's 2018 budget means that ordinary Americans and US allies overseas will have to tighten their belts. However, before turning the ambitious plan into reality the US administration will have to get Congress's approval, RIA Novosti contributor Igor Gashkov noted.

Donald Trump's budget plan for fiscal year 2018 with the eloquent title "A New Foundation for American Greatness" signals that the Americans will have to tighten their belts.

"This Budget's defining ambition is to unleash the dreams of the American people. This requires laying a new foundation for American Greatness," the budget message of the US president says.

Trump $603Bln Budget Proposal for Pentagon Inadequate - McCain
"Through streamlined Government, we will drive an economic boom that raises incomes and expands job opportunities for all Americans. Faster economic growth, coupled with fiscal restraint, will enable us to fully fund our national priorities, balance our budget, and start to pay down our national debt," the statement reads.

To reach its objectives the plan envisages dramatic cuts to various humanitarian and welfare programs, Social Security and Medicaid, which provides health coverage for millions of Americans including low-income adults, people with disabilities and children.

Trump US Budget Includes for Border Control, Mexico Wall - Security Dept.
"We need people to go to work," he highlighted.

What is more curious, however, is that the Trump administration is simultaneously planning to increase the Pentagon's budget by about 10 percent.

Trump's plan has not come as a bolt from the blue: back in February 2017 the US president proposed to boost defense and security spending by $54 billion and "cut roughly the same amount from non-defense programs," CNN wrote.

"The cuts to welfare programs amount to $274 billion over a decade, centered around the introduction of work requirements for recipients," Russell Berman of The Atlantic pointed out, adding that the path to the balanced budget also requires "a significant expansion in economic growth that would generate trillions of dollars in added tax revenue to the government."

"The ambitious plan of the Trump team is based on the White House's estimates of economic growth in the coming decades which is envisaged in the draft budget. It is expected that US GDP will increase by 3 percent per year for coming decades," RIA Novosti contributor Igor Gashkov noted.

Gashkov quoted right-leaning newspaper Breitbart, referring to the much-discussed plan: "Conservatives will love it; moderates will probably hate it."

At the same time, the British media outlet The Guardian compared Trump's budget plan to the neo-liberal policy of the 1980s conducted by Ronald Reagan and Margaret Thatcher.

"However, in contrast to his predecessors, the new US president is committed to isolationist projects," Gashkov wrote. "The budget plan envisages financing a wall on the border with Mexico, boosting investments in the border guard service and the Ministry of Homeland Security which is combating illegal migration."

Meanwhile, some US allies also "fell prey" to the new budget plan: while Egypt, Israel and Jordan will continue to enjoy Washington's generosity, Ukraine will see tremendous cuts in US financial assistance.

It was earlier reported that a White House internal memo identified Vietnam, Tunisia, Colombia, Lebanon, the Philippines, Pakistan and Ukraine as countries that would be offered loans to purchase US military equipment, instead of receiving cash grants.

"Waking up from euphoria can last for long, but can also be rude. Trump is a businessman. He could firmly ask Kiev to settle its debts. Trump can find a way to compensate Washington's losses [from Ukraine]," Sergei Vikulov, president of the Academy for Military and Economic Problems and Finances, told RT, commenting on the issue.

Meanwhile, the Trump administration is facing a serious problem: it needs to get Congress's approval to turn its ambitious plan into reality, Gashkov emphasized, adding that not only Democrats but also moderate Republicans may vote against the draft budget.