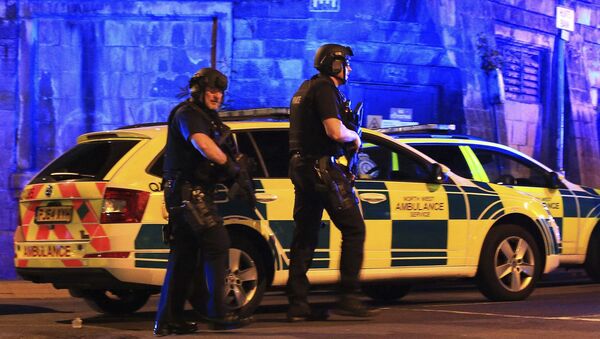 UK Prime Minister Theresa May has confirmed that the Manchester explosion is a terrorist attack.

The Manchester attack is among worst terrorist attacks in Britain, Theresa May said.

People of Manchester, the United Kingdom have "fallen victim to a callous terrorist attack," she said.

"It is now beyond doubt that the people of Manchester and of this country have fallen victim to a callous terrorist attack, an attack that targeted some of the youngest people in our society with cold calculation. This was among the worst terrorist incidents we have ever experienced in the United Kingdom."

'Horrific Incident': What is Known So Far About Manchester Suicide Attack
She added that the UK police believe one person is behind the attack, however, are checking whether he was acting alone.

UK security services believe they know the identity of the suspected perpertator of the Manchester explosion, but yet cannot verify his name, May said.

"We now know that a single terrorist detonated this improvised explosive device near one of the exits of the venue, deliberately choosing the time and place to cause maximum carnage and to kill and injure indiscriminately … The police and security services believe they know the identity of the perpetrator, but in this stage of their investigations we cannot confirm his name," May said, adding that it was yet to be determined whether the attacker acted alone or had help.

The prime minister said that the Manchester attacker wanted to cause "maximum carnage."

May said the perpetrator of the attack showed "cold calculation" by targeting "innocent, defenseless children and young people."

She said that the terror threat level in the UK remains high after the attack.

"The threat level remains at severe, that means that a terrorist attack remains highly likely … Later today … I will chair another meeting of Cobra later today," May told reporters.

The blast, which the police are considering a terrorist attack, took place outside the Manchester Arena at the end of US singer Ariana Grande's concert, leaving at least 22 people dead, including the attacker, and almost 60 injured. Greater Manchester police say they are treating the attack as a terrorist incident, confirming that the attacker who was carrying an explosive device died in the arena.