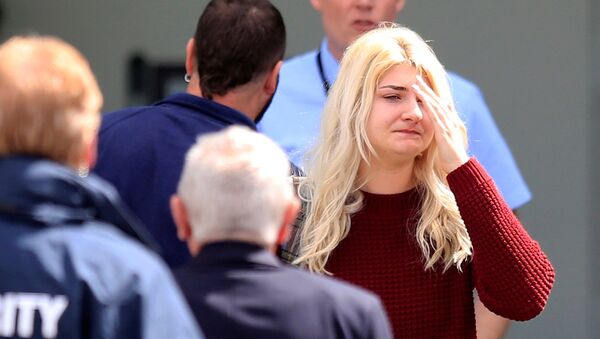 The deadly explosion in Manchester shocked both the country's leadership and its citizens, raising calls for unity in response to the terrorist attack.

MOSCOW (Sputnik) — The incident that claimed lives of at least 22 people and injured almost 60 more took place on Monday night when a deadly explosion hit the Manchester Arena at the end of US singer Ariana Grande's concert. The UK police confirmed the terrorist nature of the attack, adding that it was performed by one person, who died detonating the explosive device.

The Daesh terrorist group, which is outlawed in Russia among other countries, has already claimed responsibility for the deadly attack in Manchester, according to The Telegraph and other media outlets.

Soon after the attack, UK Prime Minister Theresa May said that the Manchester attack was among the worst terrorist incidents the United Kingdom had faced in its history.

"It is now beyond doubt that the people of Manchester and of this country have fallen victim to a callous terrorist attack, an attack that targeted some of the youngest people in our society with cold calculation. This was among the worst terrorist incidents we have ever experienced in the United Kingdom," May said.

The head of government added that the country's security services were aware of the attacker's identity.

"We now know that a single terrorist detonated this improvised explosive device near one of the exits of the venue, deliberately choosing the time and place to cause maximum carnage and to kill and injure indiscriminately … The police and security services believe they know the identity of the perpetrator, but at this stage of their investigations we cannot confirm his name," May said, adding that it was yet to be determined whether the attacker acted alone.

According to the prime minister, another attack was highly likely and the terrorist threat remained in place.

May said that the country's authorities had already held the meeting of the Cobra emergency response committee and would convene one more meeting later in the day.

Queen Elizabeth II issued a message expressing her sympathy to all affected by the terrorist attack, including to the friends and families of the victims.

"The whole nation has been shocked by the death and injury in Manchester last night of so many people, adults and children, who had just been enjoying a concert. I know I speak for everyone in expressing my deepest sympathy to all who have been affected by this dreadful event and especially to the families and friends of those who have died or were injured," the message said, as quoted by the royal press service.

The Queen expressed her admiration for the way the residents of Manchester, as well as local emergency services, had responded to the deadly incident.

"I want to thank all the members of the emergency services, who have responded with such professionalism and care. And I would like to express my admiration for the way the people of Manchester have responded, with humanity and compassion, to this act of barbarity," the message added.

On Tuesday, the situation in the city hit by the deadly explosion is still nervous and local security services are on alert.

Earlier in the day, media reported that the Arndale shopping center in Manchester had been evacuated. At the same time a representative of Greater Manchester Police — Longsight Police Station told Sputnik that the police had no information on the evacuation.

A man has been arrested at the Arndale Centre – This is not currently believed to connected to last night’s attacks.

At the same time, Greater Manchester Police said that a man was detained in south Manchester in relation to the deadly attack.

With regards to last night’s incident at the Manchester arena, we can confirm we have arrested a 23-year-old man in South Manchester.

Soon after the attack, Manchester Mayor Andy Burnham expressed his condolences over the attack and called on the residents of the city to join a vigil to commemorate the victims.