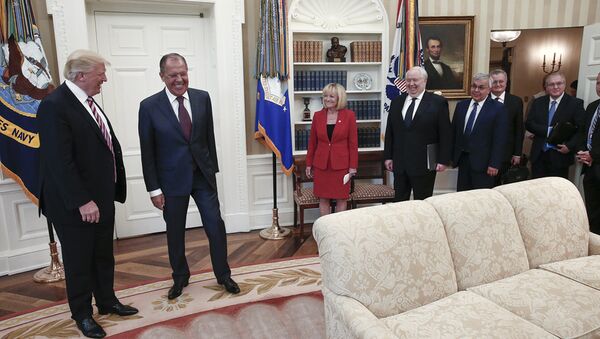 © Photo : RUSSIAN FOREIGN MINISTRY
Subscribe
The US intelligence community not begun an assessment to look into what information President Donald Trump may have been shared with Russian Foreign Minister Sergey Lavrov or Ambassador Sergey Kislyak during their meeting at the White House, Director of National Intelligence Dan Coats told the Senate Armed Services Committee on Tuesday.

WASHINGTON (Sputnik) — Both Trump and numerous Russian officials, including President Vladimir Putin, have repeatedly denied claims of alleged Moscow's collusion with the US president's campaign, as well as of the Kremlin's interference in the 2016 US election.

"We have not initiated an assessment," Coats stated when asked if the intelligence community had begun to assess the nature and impact of the information revealed by the president.

On Sunday, McCain criticized Russian Foreign Minister Sergei Lavrov's recent visit to the White House, calling him "nothing but a propagandist" and a "stooge" of Russian President Vladimir Putin, adding that Lavrov "had no business in the Oval Office."

Kremlin spokesman Dmitry Peskov commented on the statement by saying that McCain does not define the United States' foreign policy and thus should not be interpreted as a reflection of Washington's official stance.

Flynn Pleads the 5th, Will Not Comply With Senate Intelligence Probe
On May 10, US President Donald Trump met with Lavrov and Ambassador to the United States Sergei Kislyak in the White House. The meeting has been repeatedly criticized by US officials, including McCain, and news outlets, and also created several myths over the details of the conversation.

In one of the latest examples of media outlets' guessing about Trump's talks with Lavrov is the claim that former FBI Director James Comey's dismissal had been discussed.

Lavrov dismissed the claim saying: "We did not touch on that topic at all."

Earlier in May, the Washington Post newspaper reported, citing officials, that Trump had revealed sensitive information to Lavrov and Kislyak during their May 10 meeting at the White House without the permission of the nation that provided the intelligence.

Trump responded by saying that he had the "absolute right" to share facts pertaining to terrorism and airline flight safety with the Russian officials.