Philippines Does Not Want to 'Be Dragged Into Hybrid Standoff' Between US, China 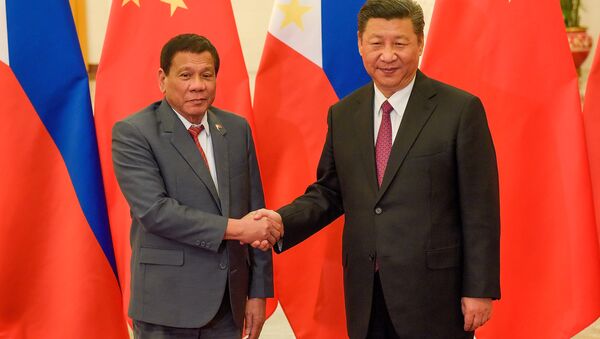 The Philippines does not want to be a pawn in the standoff between the United States and China in Southeast Asia. Washington may not help Manila in the event of a conflict with Beijing, and this is why the Philippines will continue talks with China, experts told Sputnik.

'You Must Be Kidding': Duterte Won't Allow US to Treat Philippines as Colony
Philippine President Rodrigo Duterte is scheduled to begin his first official visit to Russia on Wednesday.

Prior to the visit, Duterte gave an interview to Russia media. Commenting on the current state of relations between the Philippines and China, Duterte said that Manila will continue negotiations with Beijing on the territorial claims in the South China Sea when it is the right time for talks.

"Talks will take place, but not now. Now, everyone should calm down, and when the time is right the talks will resume," the Philippine leader said.

He added that if the Philippines is engaged in a military conflict with China it would be a "massacre."

"Do you expect me to fight China in a war? Do I have the cruise missiles for hitting them?" Duterte said.

China and some other regional players, including the Philippines, Japan and Vietnam, have had differences over the maritime borders and areas of responsibility in the South China Sea and the East China Sea.

Philippines' President Duterte: Conflict With China Would 'Be a Massacre'
Beijing says that the Philippines and Vietnam deliberately use Washington’s support to escalate tensions in the region. In July 2016, the Hague's Permanent Court of Arbitration ruled that China has no rights for territorial claims in the region. According to the ruling, the disputed Spratly Islets are not an exceptional economic zone. China has not recognized the ruling.

Alexei Fenenko, an expert at the international relations department at Moscow State University, suggested that a conflict like the one mentioned by Duterte is possible.

"The possibility of a conflict is real if the US forces the Philippines and Vietnam into confrontation with China. In the Philippines, there are growing concerns that Washington may drag it into a hybrid standoff against Beijing. Manila does not want such a scenario. It does not want an open conflict with China. But the Philippines sees that Washington’s foreign policy has been aggressive in recent years and that the US military doctrine does not rule out conflicts with Russia and China," Fenenko told Sputnik China.

In the interview, Duterte said he considers US President Donald Trump a friend. At the same time, he stressed that the Philippines has turned away from its previous pro-American foreign policy. According to Duterte, Manila is now focused on developing cooperation with China, ASEAN and Russia.

US, Philippines Begin Annual Joint Military Drills, on Smaller Scale
In the interview Duterte could have indicated that Manila expects protection from Washington in the event of a military conflict because the sides have a mutual defense agreement. However, the president did not say that because he knows that the US will not help the Philippines against China, according to Daria Panarina, an expert at the Institute for Oriental Studies, at the Russian Academy of Sciences.

"I guess they have a clear understanding of the situation. The Philippines cannot fully rely on US support in the event of confrontation with China. The tensions over the territorial claims [in the South China Sea] are all about maintaining the power balance by peaceful means. None of the countries involved is ready for military actions. For example, the Philippines armed forces are aimed only at resolving domestic problems, including fighting terrorists and separatists. Manila cannot afford engaging in a direct military confrontation," Panarina pointed out.

Duterte warned against driving the territorial dispute to extremes, including a military conflict, according to Yang Mian, an expert at the Center of International Relations at the Chinese Institute of Communications.

Philippine President Duterte Vows Not to Buy US Arms, Mulls Turning to Russia
"During his meeting with Duterte, Chinese President Xi Jinping already expressed concern over the possibility of a conflict. Duterte’s statement is important because he told advocates of a hardline policy that the Philippines does not have the potential for a war with China. I think his real goal is to prevent war," Yang said.

According to the Chinese expert, Manila will not harden its stance towards China because Duterte made it clear that his country needs a "new policy" on the matter.

"Duterte can be explosive and make outrageous statements, but this time he was serious. A military confrontation with China would be a disaster for the Philippines," he noted.