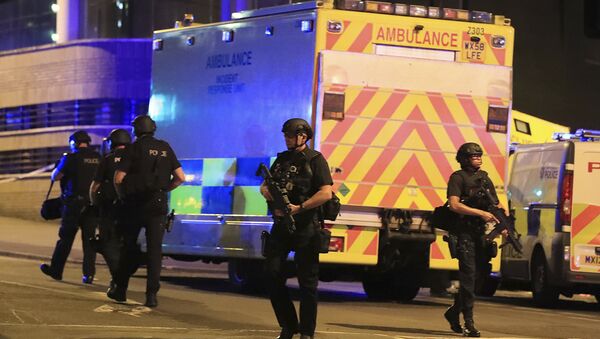 'Horrific Incident': What is Known So Far About Manchester Suicide Attack
At least 22 people, including children, were killed and 59 injured when a blast rocked through the Manchester Arena foyer after the concert of US singer Ariana Grande on Monday night. Greater Manchester police say they are treating the attack as a terrorist incident, confirming that the attacker who was carrying an explosive device died in the arena.

According to Reuters, Daesh claimed the Manchester attack had been carried out with an explosive device planted at the concert.

Earlier in the day, British Prime Minister Theresa May said that police believe the terrorist attack had been carried out by one person, however, law enforcers are checking whether he had any accomplices. Police believe they have identified the suspected attacker, however, have not verified their information yet, she added.

After that, Greater Manchester police said that a 23-year-old man had been arrested in connection with the attack.

000000
Popular comments
After that, Greater Manchester police said that a 23-year-old man had been arrested in connection with the attack. -- Either false flag or arresting the wrong person. How can they ALWAYS make an arrest within 24 hours? They supposedly had no clue to prevent it, but they can arrest someone almost every time within 24 hours. Still waiting for the cell phone or Russian or Syrian or Iranian passport to be "found" or maybe a selfie of the terrorist planting the bomb while wearing an "I Love Putin" button to be found. Too much definitive evidence that assists the globalist narrative, too quickly.
stop the NATO wars
23 May 2017, 15:03 GMT3
000000
Just like Syrian Observatory, this is fake.