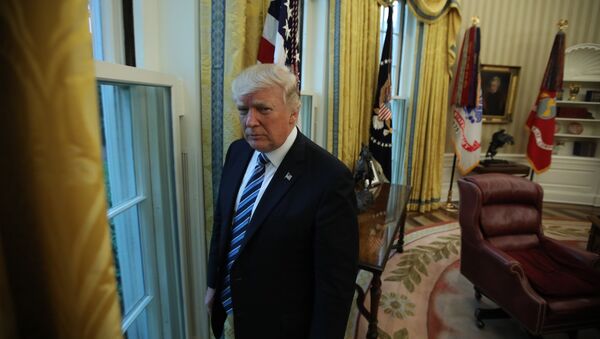 The unconfirmed reports "are clearly an attempt to split the Republican Party which has a majority in Congress. It is a well-known fact that many Republicans tend to overreact to news relating to Russia. Take Senator John McCain's statements on Russian Foreign Minister Sergei Lavrov, for instance. In other words, such articles are aimed at undermining Trump's domestic agenda," the analyst explained.

Earlier on Monday, the Washington Post reported that Trump asked Director of National Intelligence Daniel Coats and NSA chief Adm. Michael S. Rogers to deny that there is any evidence of what the newspaper referred to as "collusion" between the Trump team and Russian officials.

Poll Shows Over 50% in US Disbelieve Trump's Campaign Colluded With Russia
Trump is alleged to have approached Coats and Rogers in March after former FBI Director James Comey said that the bureau was looking into the Trump campaign's relations with Russia, the media outlet added, citing two current and two former US officials, who spoke on condition of anonymity.

Abzalov, the president of the Center for Strategic Communications, said that the article appears to have been scheduled to appear at a time when the White House was slated to reveal its budget proposal for fiscal year 2018 and Trump's first overseas trip.

"They spin the topic of Russia's supposed meddling, limiting [Trump's] ability to pass his budget proposal through Congress," the analyst explained. "Trump's main goal at the moment is probably to counterpose his foreign policy agenda to allegations in the media. It is against this backdrop that US media outlets are trying to fuel issues linked to Russia. There are numerous reasons behind such stories, including an attempt to undermine foreign policy deals of the US president."