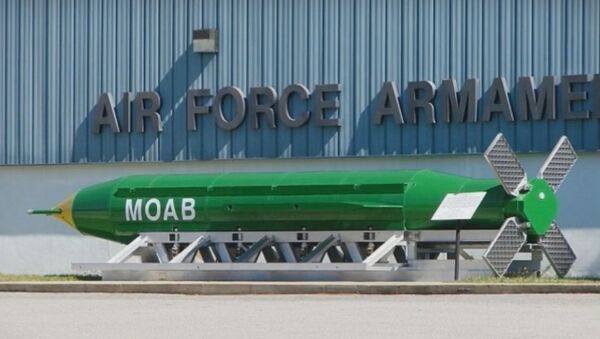 © YouTube/JustInfortheTruth
Subscribe
International
India
Africa
The US Air Force’s weapon of the future may not be so high-tech after all: a miniature version of the MOAB bomb that the Pentagon dropped on Afghanistan in April, Defense Tech reported.

The Massive Ordnance Air Blast bomb, a 21,000-pound weapon, is also referred to as “the Mother Of All Bombs.” Engineers at the Air Force Research Lab are developing her infant: a leaner and more modular explosive, with 3-D printing.

“We’ve been working on printing [munitions] for the past five to 10 years,” said John Corley of the Air Force.

Corley told reporters the bomb is designed to include “selectable effects.”

The bomb itself is still a few years away from production, according to the Air Force official.

The Pentagon has deployed additive manufacturing technology to build other weapons, too, like the RAMBO grenade launcher.