Your Fault, Not Ours: Turkey, US Trade Blame Over Brawl at Washington Embassy 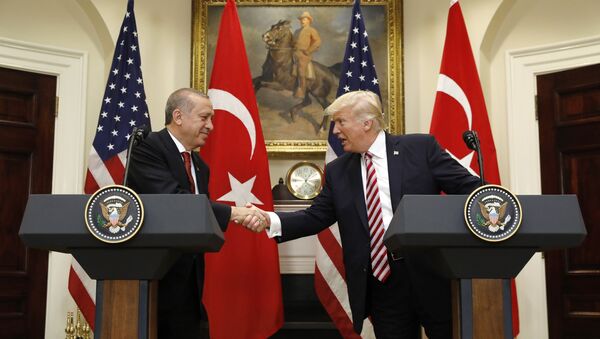 The plot thickens in the street fight that broke out in front of the Turkish embassy in Washington on Tuesday during Turkish President Recep Tayyip Erdogan’s DC visit. Ankara has demanded an apology from the United States for alleged "aggressive and unprofessional actions" by US security personnel during the brawl, which sent nine to the hospital.

Ankara has announced that they have summoned US ambassador to Turkey, John Bass, to appear before Turkish Foreign Ministry officials to answer for the "aggressive and unprofessional actions." DC police officers were involved in the brawl, and one of them was among the nine people injured. However, video footage shows the officers trying (unsuccessfully) to break up the brawlers. The Foreign Ministry did not elaborate as to specifically what conduct they found inappropriate.

The Ministry claimed that "a written and verbal protest was delivered" to Bass, "due to the aggressive and unprofessional actions taken, contrary to diplomatic rules and practices, by US security personnel." It also requested that the US conduct "a full investigation of this diplomatic incident," and added that the "lapses of security" during Erdogan's stay were "caused by the inability of US authorities to take sufficient precautions at every stage of the official program."

The US State Department claimed that the attackers were Turkish embassy staff and some of Erdogan's personal bodyguards. They detained two of the bodyguards but swiftly released them because they enjoyed diplomatic immunity from prosecution. They have referred to the conduct of the Turkish officials as "deeply disturbing," and vowed to hold those responsible for the violence accountable.

"The State Department has raised its concerns about those events at the highest levels," said spokeswoman Heather Nauert. However, US Secretary of State Rex Tillerson said that the administration would not take action against the "outrageous" behavior until an investigation was completed.

The Turkish embassy in turn claimed that the protesters "began aggressively provoking Turkish-American citizens who had peacefully assembled to greet the President," which resulted in violence. They also argued that the protesters were members of the PKK (Kurdistan Worker's Party), a Kurdish independence movement that has been a thorn in the side of Turkey for decades. The PKK is considered to be a terrorist group by NATO and the United States.

The embassy also claimed that the bodyguards involved in the fighting were part of Foreign Minister Mevlut Cavusoglu's security detail, not Erdogan's.

The action comes in the wake of stern American condemnation of the actions of the Turkish officials. The mayor as well as the police chief of DC, various Congressmen and the US State Department all condemned the violence.

Some, like Senator John McCain (R-AZ), have called for the Turkish ambassador to the United States to be ejected from the country as a penalty. A group of nearly 30 Congressional Democrats called for the bodyguards to be returned to the US and "arrested, prosecuted, and jailed." "This kind of behavior by a foreign security detail is reprehensible and cannot be tolerated," they wrote.

On Wednesday, video surfaced online of Erdogan briefly observing the protests from the embassy entrance, leading to speculation that he may have directly ordered them.