America’s Own Arab Spring? The Dire Threats of Getting Rid of Donald 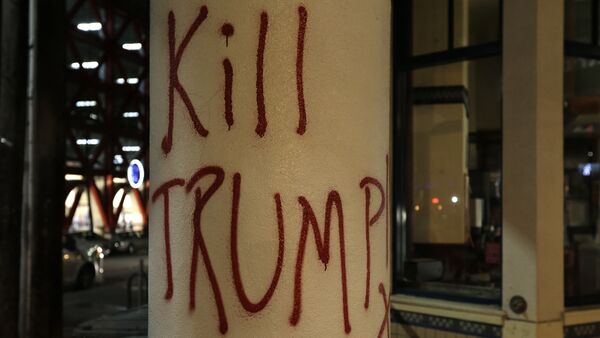 As President Trump continues his tour of the Middle East, it seems that domestic political scandals around him are gathering strength. Radio Sputnik commentator Ilya Kharlamov reviews the arguments being used by those backing calls for impeachment and warns of the dangers of the so-called 'Arab Spring' and 'colored revolutions'.

Trump's Advisers Will 'Drive Him to the Red Line' in Syria
Last week, the US Department of Justice appointed former FBI director Robert Mueller as special counsel to investigate alleged ties between Donald Trump’s presidential campaign team and Russia. Mueller will also investigate the allegations of Russian intervention in the election generally.

Meanwhile, Donald Trump's "obstruction of the ongoing investigation into Russia's alleged interference," which he apparently demonstrated by dismissing ex-FBI head James Comey, has been used by US Congressman Al Green, a Democrat from the state of Texas, as a pretext for a call to impeach the President.

Radio Sputnik commentator Ilya Kharlamov runs through the arguments which are being used to call for impeaching Trump. He points to the recent report by The Washington Post that a "month before Donald Trump clinched the Republican nomination, one of his closest allies in Congress — House Majority Leader Kevin McCarthy — made a politically explosive assertion in a private conversation on Capitol Hill with his fellow GOP leaders: that Trump could be the beneficiary of payments from Russian President Vladimir Putin."

When the Cat's Away, Mice Will Play: Trump Trip Sparks New Rumors in White House
"There’s two people I think Putin pays: Rohrabacher and Trump," McCarthy (R-Calif.) said, according to a recording of the June 15, 2016, exchange, which the outlet says it has heard and believes to be true.

Rep. Dana Rohrabacher is a Californian Republican "known in Congress as a fervent defender of Putin and Russia," it explained.

McCarthy’s claim naturally drew laughter from the lawmakers assembled, to which the congressman apparently replied "Swear to God!"

Kharlamov noted that prior to asking for supernatural assistance; actually presenting a grain of evidence might better support one’s case.

"The country, which has in possession the most advanced technologies in all spheres of life, is steadily moving towards an intellectual collapse, when orchestrated rumors, speculation and accusations define the agenda," he writes in his article for Sputnik.

Why is the US Bombing Assad's Troops and How is It Connected With James Comey?
Kharlamov further suggested that the White House opponents seem to be laying the ground for an 'Arab Spring' or 'colored revolution' for the US itself, the same tactic used throughout the world to get rid of governments and leaders who find themselves out of favor with Washington.

He warned of the dire consequences it might cause, given the amount of nukes it possesses and the number of small arms possessed by its citizens.