Sunday saw the complete withdrawal of militants from the western Syrian city of Homs, which was the first city where the so-called opposition confronted President Assad and his government. Russian political analyst Alexander Guryev, director of the Institute of Strategic Planning, commented on the political importance of the liberation of the city.

The last convoy of militants left the western Syrian city of Homs toward Jarablus on Sunday, completing their withdrawal from al-Waer district of the city. 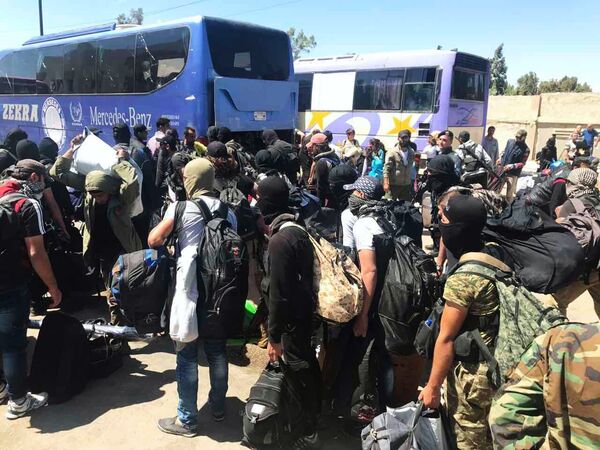 "The final convoy has departed from al-Waer district, while civilians not wishing to leave their homes remained in the district. After the sappers enter the district it will be decided, whether the mass media representatives will be allowed to visit the last liberated district," a Syrian police officer told Sputnik.

The final eleventh stage of militant withdrawal started on Saturday with over 2,500 people leaving the city including 700 militants.

Russian political analyst Alexander Guryev, director of the Institute of Strategic Planning, commented on the political importance of the liberation of the city, noting that Homs was a de facto capital of the radical groups.  Back in 2011, he said, Homs became the first city where the so-called opposition confronted President Assad and his government.

Syria's Homs is Now Completely Free as Last Militants Leave al-Waer District
The political analyst suggested that the radicals will now concentrate their forces in the northwestern city of Idlib, which will be their next target.

"The fight is going on, however the liberation of Homs has a very important political meaning. The war in Syria has spilled all over the Middle East to Iraq, Iran, Afghanistan, Pakistan and Turkey. Even though there are no direct military actions in some of these countries, they, directly or indirectly, participate in the Syrian conflict," he told RT news channel.

The top task for the government forces, he said, is now gradually liberate the whole country, re-taking a city after city, as there are settlements still held by radical and opposition forces.