Life After Daesh: Why the Middle East Risks Facing Many More Political Problems 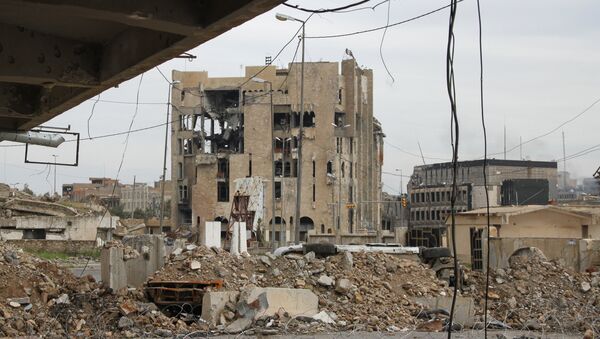 © Sputnik / Rafael Daminov
/
Go to the photo bank
Subscribe
On Saturday, Iraqi Special Forces declared their mission in Mosul complete despite ongoing battles in a handful of its western neighborhoods. Sputnik discussed the developments with political analyst and journalist Wladimir van Wilgenburg who explained why the country risks facing many more political problems once the Daesh threat is eliminated.

Threat of Daesh Chemical Attack on Mosul 'Most Likely Bluff'
Iraqi Special Forces spokesman Sabah al-Numan said that the troops have liberated some of the remaining western districts of the embattled city from Daesh fighters.

He also noted that they were ready to support any other forces if the Prime Minister gave them the order.

Despite the announcement, battles are still continuing in Mosul, forcing hundreds of civilians to flee every day.

The battle to retake the ancient city from terrorist groups began last November as part of a joint initiative between Iraqi government forces, the Kurdish Peshmerga and the US-led coalition. Daesh, also referred to as the Islamic State still controls about eight square kilometers of western Mosul.

Meanwhile, some US policy experts have claimed that the US will need to deploy several thousand troops long-term in Iraq after Daesh is defeated, to stabilize the country.

Radio Sputnik discussed the situation with political analyst and freelance journalist Wladimir van Wilgenburg, who has recently returned from Iraq.

"The last time the US army left Iraq, it was amid a lot of political problems. Probably it would be necessary to keep at least some US forces in Iraq after-Daesh to prevent fighting between the forces who have been fighting the terrorists or to prevent them using political problems against each other. Otherwise you will see the same thing that happened in 2014," he told Sputnik, referring to the year when the Iraqi insurgency escalated into a civil war with the conquest of Mosul and Tikrit and major areas in northern Iraq by the Islamic State.

The problem is that there is not a lot of money for the rebuilding of Iraq, he further explained. Hence it will be very difficult to restore the country in a short period of time. It will take years for Iraq to recover on its own.

"There will be many more political problems, because now a lot of Iraqi forces and groups are united against Daesh. But once the Daesh threat is diminished, it will most likely be a fight between other groups. There can be problems between Sunnis, Shias, between the Kurds, between the Kurds and Shias and the other way around. The country won't necessarily be stable afterwards," he told Sputnik.

Back to Iraq: Up to 20,000 American Soldiers May Stay to Mop Up Daesh
The political analyst suggested that despite the claims that Daesh will be defeated soon, the group won't be fully eliminated.

Daesh will be defeated, he said, their Caliphate will cease to exist, but they will go underground and still be able to carry out attacks and destabilize the country.

"Daesh won't be able to hold large amount of territories any more. They will go underground and they will make attacks on checkpoints and carry out suicide attacks. We have already been seeing it in some areas of Iraq, in Baghdad and Anbar," he said,

Wladimir van Wilgenburg also suggested that it might evolve into some other group. However there are other Shia paramilitary groups, the Kurds, Sunni groups who could fill the political vacuum after Daesh are gone.

000000
Popular comments
April 07, 2017 Pentagon Trained Syria’s Al Qaeda “Rebels” in the Use of Chemical Weapons The Western media refutes their own lies www.globalresearch.ca/pentagon-trained-syrias-al-qaeda-rebels-in-the-use-of-chemical-weapons/5583784