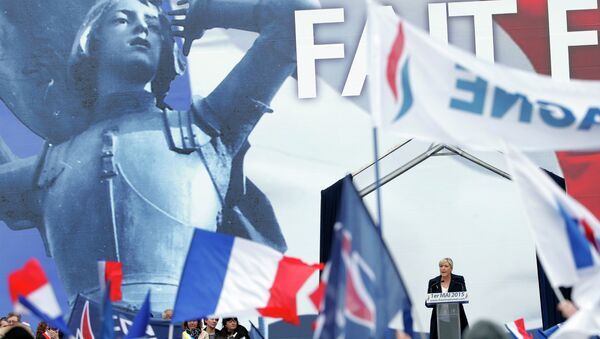 France's National Front party has given up the idea of leaving the European Union after Marine Le Pen's loss in the presidential election.

MOSCOW (Sputnik) — French right-wing National Front (FN) party will no longer insist on its plan to withdraw France from the European Union and the Eurozone as the recent presidential election, which the party's candidate lost, showed that this program was not popular with the voters, FN economic strategist Bernard Monot said.

"There will be no Frexit. We have taken note of what the French people told us," Monot told The Telegraph newspaper on Sunday.

Monot added that he still did not believe in viability of the euro, but it was no use "insisting stubbornly."

"From now on our policy will be to renegotiate the EU treaties to give us more control over our budget and banking regulations," the strategist was quoted as saying.

EU Giving Hard Time to UK to Avert Frexit – Lawmaker
The decision to reverse its stance on Europe may now lead to tensions within the party itself as FN Vice President Florian Philippot already said last week that he might leave if a softer policy on the Eurozone was adopted.