The Battle for Arsenal: Many Fans Want Russian Billionaire to Take Over 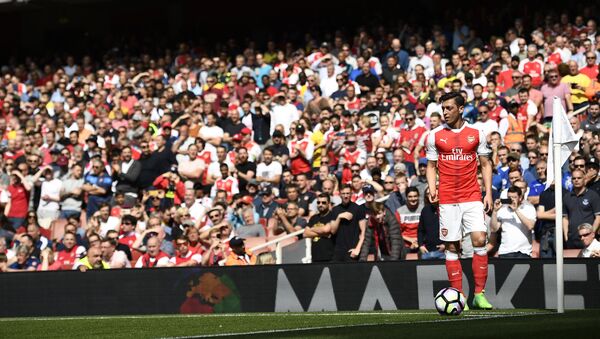 © REUTERS / Dylan Martinez
Subscribe
One of Europe's most famous football clubs is at the heart of a tug-of-war between an American billionaire and his Russian rival. The football season ended on Sunday and Arsenal missed out on Champions' League qualification for the first time in 20 years.

Fans of the club, known as The Gunners, are increasingly restless and many want the club's owner Stan Kroenke to leave and take manager Arsene Wenger with him.

Although Wenger won the Premier League title in 2002 and again in 2004 — when Arsenal went through the entire season unbeaten — the club has underperformed in recent seasons.

Kroenke, who took over a 67 percent majority shareholding in the club in 2011, has been accused of failing to invest in the team, failing to put pressure on Wenger and being satisfied with fourth place, which means qualification for the Champions' League and extra TV revenue.

Kroenke overtakes Russia's Usmanov as Arsenal key shareholder
Uzbekistan-born Alisher Usmanov made a US$1.3billion bid on May 19, which was rejected but is set to return with a fresh bid, which may be in excess of US$2 billion.

Usmanov is Russia's richest man and his USM company owns several firms, including Metalloinvest, the largest iron ore producer in Russia. In 2014, he moved all his assets back to Russia, following a call for deoffshorization of the Russian economy by President Vladimir Putin.

Usmanov and Kroenke have been battling for control of the club for almost a decade. In 2009 Kroenke bought enough shares to overtake Usmanov as the largest shareholder. Two years later he bought a majority shareholding.

Moitreyo Handique, 21, an Arsenal fan from Assam in India, said: "I've been supporting Arsenal since 2003. I fell in love with Arsenal. Thierry Henry and Denis Bergkamp made me a hardcore Gooner."

"When Arsene came to England he came in with new ideas which were revolutionary and he had the deep-rooted knowledge of the French league which combined with the genius of David Dein, but with time he became arrogant and his ego inflated and today that same person who revolutionized football is not at all willing to listen to new ideas and not at all open to change. He has lost his touch," Handique told Sputnik.

Handique said: "I believe Usmanov has passion and is willing to make Arsenal a big club."

"He is willing to do that by paying the necessary funds to support the manager in these competitive times. Kroenke is just a greedy American businessman with no passion for the sport. He looks at the club as a corporation rather than a football club. His idea of success is profit, rather than trophies."

"I believe Usmanov will be willing to treat the club as it should be, as a football club," Handique told Sputnik.

The American's company, Kroenke Sports and Entertainment (KSE), released a statement today saying: "KSE UK Inc notes the recent media speculation concerning its shareholding in Arsenal Holdings PLC and confirms its shares are not, and never have been, for sale. KSE is a committed, long term investor in Arsenal and will remain so."

But Arsenal fan Mr. DT, who has a YouTube channel all about the club, tweeted today:

Shock news: Kroenke camp said to be wavering over Usmanov bid. Hearing his son, Josh, and two #AFC board members are pressuring him to sell.

​Asked about missing out on the Champions' League, Wenger said last night: "It is disappointing because it's our minimum target. But maybe it will open some eyes to some people that it's not as easy as it looked for 20 years."

He said it was important for the playing squad to stay together and added: "No matter what happens I am convinced this group will win the league."

The Frenchman said he would not confirm until after Saturday's FA Cup Final against Chelsea whether he would remain as Arsenal manager next season.

Czech goalkeeper Petr Cech said Sunday: "If you have one off year in 20 years, it's not a problem.

"The club has a strong foundation, strong organization and everything to be out for one year and come back straight in, like Chelsea did last season. I think it helped them not to be involved [in Europe] this season, because they could keep all their energy for the league."

But this season they are all struggling and critics say he has a track record of failing to invest in teams he owns.

His most expensive signing for Arsenal — Chilean striker Alexis Sanchez, who joined for US$45 million in 2014 — is reportedly unhappy at the club and is thought to be considering a move to Manchester City or Bayern Munich.

Arsenal are estimated to be worth US$2.35 billion and Kroenke's shareholding is worth around US$1.56 billion.

It is thought that if Usmanov offers him enough money he will walk away, especially as the club's fans are becoming increasingly hostile.

Usmanov, who is worth US$14.6 billion, has deep pockets and he appears to believe now is the right time for him to strike.

If he takes over it could spark a major investment as he seeks to take on another Russian billionaire, Roman Abramovich, whose club Chelsea have just won the Premier League title.

000000
Popular comments
It seems that sputnik is happy that another Russian oligarch who is stealing the country's wealth is investing in English football. Its strange really, this Russian megalomania reminds me the period of Chars, the worst period of Russian history.
giorgoskaz11
22 May 2017, 23:38 GMT
000000
Newsfeed
0
New firstOld first
loader
LIVE
Заголовок открываемого материала
Access to the chat has been blocked for violating the rules . You will be able to participate again through:∞. If you do not agree with the blocking, please use the feedback form
The discussion is closed. You can participate in the discussion within 24 hours after the publication of the article.
To participate in the discussion
log in or register
loader
Chats
Заголовок открываемого материала
Worldwide
InternationalEnglishEnglishMundoEspañolSpanish
Europe
DeutschlandDeutschGermanFranceFrançaisFrenchΕλλάδαΕλληνικάGreekItaliaItalianoItalianČeská republikaČeštinaCzechPolskaPolskiPolishСрбиjаСрпскиSerbianLatvijaLatviešuLatvianLietuvaLietuviųLithuanianMoldovaMoldoveneascăMoldavianБеларусьБеларускiBelarusian
Transcaucasia
ԱրմենիաՀայերենArmenianАҧсныАҧсышәалаAbkhazХуссар ИрыстонИронауОssetianსაქართველოქართულიGeorgianAzərbaycanАzərbaycancaAzerbaijani
Middle East
Sputnik عربيArabicArabicTürkiyeTürkçeTurkishSputnik ایرانPersianPersianSputnik افغانستانDariDari
Central Asia
ҚазақстанҚазақ тіліKazakhКыргызстанКыргызчаKyrgyzOʻzbekistonЎзбекчаUzbekТоҷикистонТоҷикӣTajik
East & Southeast Asia
Việt NamTiếng ViệtVietnamese日本日本語Japanese俄罗斯卫星通讯社中文（简体）Chinese (simplified)俄罗斯卫星通讯社中文（繁体）Chinese (traditional)
South America
BrasilPortuguêsPortuguese
NewsfeedBreaking
15:07 GMTEU Commission Chief Announces Launch of Competitor to China’s Belt and Road
14:51 GMTEU Not Informed About New US, UK & Australia Alliance, Plans ‘to Assess Implications’
14:48 GMT'BJP's Politics Behind 96% Jump in Communal Riots in India', Says Opposition Congress
14:46 GMT‘No Friend of China’: As Raab Exits Stage Left, What Will UK Foreign Policy Look Like Under Truss?
14:34 GMTSouth African Child Maintenance Payments Delayed by Ransomware Attack
14:34 GMTEuropean Gas Futures Fall Below $750 Per 1,000 Cubic Meters
14:29 GMTIs the Age of the Car Over as Politicians Around Europe Declare War on the Motorist?
14:29 GMTMessage for India? AUKUS Announcement Sparks Debate About Relevance of Quad, Reliability of US
14:15 GMTBlack Market Business for Foreign Visas Skyrockets in Afghanistan, Reports Say
13:29 GMTSequoia National Park in California Closes Due to Massive Wildfire, Administration Says
13:28 GMTRussia Threatens to Take Measures Against US Over Interference in Elections, Foreign Ministry Says
13:28 GMTCricketer Virat Kohli Confirms He Will Step Down as India's T20I Captain After ICC T20 World Cup
13:22 GMTShell Touts Plans for One of Europe's Largest Biofuel Plants
13:16 GMTWomen's Average Salary in Saudi Arabia Has Exceeded That of Men for the First Time, Report Says
13:10 GMTNo More Words: Microsoft Allows Use of Facial Recognition or Fingerprints Instead of Password
12:50 GMTNew Zealand Being Left Out of AUKUS Shows Canberra, Wellington 'Going in Very Different Directions'
12:14 GMTBiden Went For Full Afghanistan Pullout Despite His Cabinet's Advice, Book Claims
12:04 GMTChina Plans to Launch Experimental Reactor That May Revolutionise Atomic Energy Industry
11:26 GMTFrance May Demand Compensation From Australia for Submarine Deal Breach, Defence Minister Says
11:22 GMTKremlin Regrets European Parliament's Russia Report