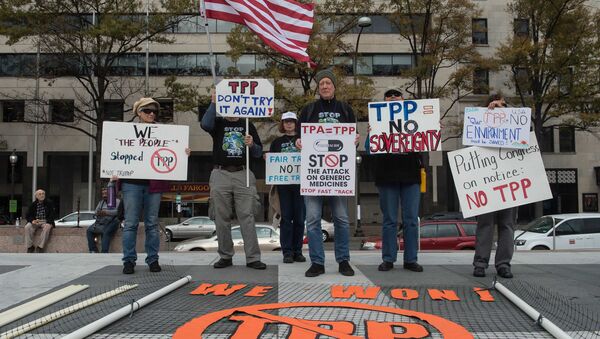 The US decision to withdraw from the Trans-Pacific Partnership (TPP) trade deal will not be changed, but Washington will remain actively engaged in the regional trade affairs, US Trade Representative Robert Lighthizer said Sunday.

HANOI (Sputnik) — Right after taking the office in January 2017, US President Donald Trump signed an executive order to withdraw from the deal between the United States and 11 other Pacific Rim states, fulfilling one of his promises made during the election campaign.

"The United States pulled out of the TPP and it is not going to change the decision," the trade representative said at a press conference after ministerial meeting of Asia-Pacific Economic Cooperation (APEC) countries in Vietnam.

Lighthizer stressed that despite the US decision on TPP, Washington's engagement in the region will continue on a bilateral basis, noting that the United States was one of the key players of the region's market.

"It does not mean that we won's engage in this area. We very much expect to do that. We are still an enormous exporter to this area [and] we are enormous importer from this area. We expect to engage with members here in many cases on bilateral basis. The president made a decision, which I certainly agree with, that bilateral negotiations are better for the United States than multilateral, and after review the TPP was not in the interest of the United States," Lighthizer said.

The TPP agreement was negotiated in unusual secrecy and finally signed in February 2016. Critics had voiced significant concern the trade deal would undermine standards and regulations on environmental protection, health and safety, as well as workers’ rights.