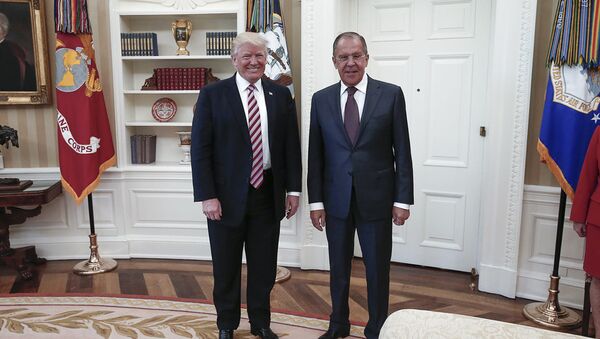 During the May 10 meeting with Russian Foreign Minister Sergei Lavrov, US President Donald Trump pointed out that domestic issues would not get in the way of his foreign policy, illustrating it by the dismissal of former FBI Director James Comey, US Secretary of State Rex Tillerson said Sunday.

MOSCOW (Sputnik) — On Friday, The New York Times newspaper wrote, citing an obtained document, that during the meeting between Trump and Lavrov the US president said that Comey's firing on May 9 relived "great pressure." Critics of the president's decision cited concerns that the dismissal could came in connection with the ongoing federal investigation into alleged Russian ties to Trump campaign.

"The point he was making is that 'I am not gonna be distracted by all those things that are happening here at home nor let them get in the way of the important work of engaging Russia to see what can be done to improve this relationship,'" Tillerson told the Fox News broadcaster answering the question concerning the article.

Trump's National Security Adviser Herbert Raymond McMaster, on his part, said that the issue of Comey's dismissal was mentioned during talks with Lavrov in the context of obstructive influence that the "Russia news" circulating in US media have on the bilateral relations.

"But the gist of the conversation was that the president feels as if he is hamstrung in his ability to work with Russia to find areas of cooperation because this has been obviously so much in the news. And that was the intention of that portion of that conversation," McMaster told the ABC News broadcaster in an interview on Sunday.

Russia has repeatedly denied claims of meddling in the US political process, calling such allegations absurd. Kremlin spokesman Dmitry Peskov has said Moscow did not have official contacts with Trump's team during the US presidential campaign.