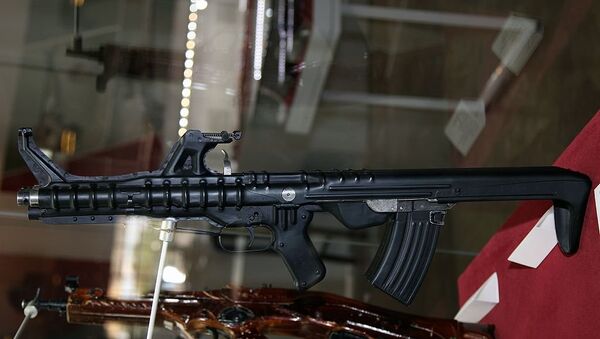 The Soviet Union's AK series of assault rifles has long become something of a household name in automatic weapons design. But they were far from the only assault rifle design Soviet designers were able to come up with during the Cold War.

In highly secretive programs, some of which remain classified to this day, Soviet engineers actively worked to create unique designs to compete with the US's own next-gen service rifle programs, such as the Objective Individual Combat Weapon (OICW), the Advanced Combat Rifle (ACR) program, and the Special Purpose Individual Weapon (SPIW) program.

How Gorbachev Destroyed the USSR's Military Space Program, & What It Cost Russia
Looking through some of these Soviet projects in an analysis piece for Lenta.ru, military analyst and small-arms expert Vladislav Grinkevich explained that one key difference between the Soviet and American programs was that US weapons designers actively and energetically promoted and marketed their projects, the Soviet engineers' work was more often than not kept secret, much of it emerging only long after the USSR's collapse.

In any case, Grinkevich suggested that when judging the ultimate efficacy of both programs, it is highly indicative that even decades after the collapse of the Soviet Union, US Army grunts are still armed with M16 rifle, while Russian troops are still equipped mostly with the trusty Kalashnikov.

Grandfather of the Bullpup

The journalist explained that Soviet small-arms designers began experimenting with bold assault rifle designs right from their debut in the late 1940s, soon after the military had approved the 7.62x39-mm cartridge. In addition to the AK-47, which ended up winning the competition to become the Soviet Army's standard rifle, designers from the Tula Design Bureau entered an unusual design – the TKB-408.

Developed from 1945-1947 by legendary automatic rifle designer German Korobov at the Tula Arms Plant (TKB is the Russian acronym for the factory) the TKB-408 is broadly considered to be one of the world's first bullpup rifles. (A bullpup is the firearm configuration where the rifle's action and magazine are located behind the trigger). 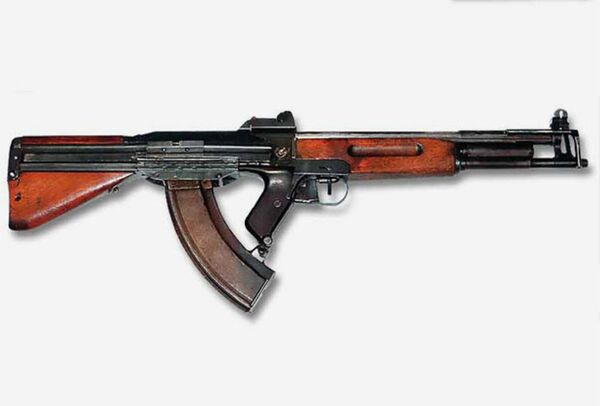 Aside from its bullpup arrangement, TKB-408 was otherwise a rather standard design, with a gas-operated, tilting-bolt action. State testing after the war did not yield particularly impressive results. Grinkevich wrote: "The gun had low accuracy, poor reliability and a low working life of only 5,000 rounds. In other words, it was no competitor to the Kalashnikov."

New Defense Program: 'Russia to Rely on Innovative Intellectual Weapons'
Still, the journalist added that its shortcomings notwithstanding, Korobov's design was important, since it would become the forerunner to revolutionary and unique rifle designs two decades later.

The TKB-408 was not Korobov's only innovative assault rifle concept of the early post-war era. In the early 1950s, the Soviet Army's Main Artillery Administration issued technical requirements for a new small arms system – an automatic rifle also serving as a light machinegun. In response, Korobov and his team developed the TKB-517, a design visually similar to the AK-47, but using a delayed blowback mechanism. Hungarian weapons designer Pal Kiraly had worked to perfect the concept of delayed blowback in his handguns and machineguns during the Second World War.

The TKB-517 would go on to become the main competitor to the AKM, the modernized variant of the AK-47 introduced in the late 1950s. Grinkevich recalled that "Korobov's gun was lighter, simpler and had superior accuracy in burst firing." On its basis, the engineer also developed a light machinegun operating on both magazine and belt-fed ammunition, which would become a competitor to Kalashnikov's RPK.

"But notwithstanding its obvious advantages, Korobov's gun was still inferior to Kalashnikov's gun in the area where it counted most: reliability. Many experts believe that automatic rifles with delayed blowback are generally unable to provide adequate reliability for weapons using intermediate and machine-gun cartridges. The sad fate of the French FAMAS rifle, which uses a scheme similar to that of the TKB-517, is indirect confirmation of this."

Top 10 Imperial, Soviet and Modern Russian Aircraft Carriers Through History
After several decades of use, the French military recently abandoned the rifle, replacing it with the HK416, a more traditional assault rifle design by Heckler & Koch.

Needless to say, in the end the Soviet Army went with the proven reliability of Kalashnikov's designs.

The 1960s: The Golden Age of Soviet Bullpups

For Soviet designers, Grinkevich wrote, the 1960s "could be called the golden age of Soviet bullpups, with Korobov's designs complemented by those of another designer from Tula – Nikolai Afganasyev."

"The TKB-022 series of automatic rifle designs is broadly thought to be one of Korobov's most interesting creations. These were compact weapons encased in plastic housing. In terms of design and the materials used, the system was a genuine breakthrough – the famous plastic-based Steyer AUG appeared in Austria only about fifteen years later." 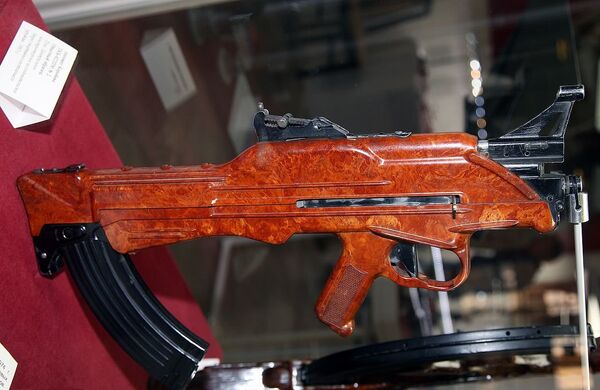 The TKB-022 had several variants. The TKB-022P featured a magazine system directly under the trigger, similar to the Israeli Uzi. The TKB-022PM, which had the same 415 mm barrel length as the AKM, was shorter than an AKMS with its stock folded. This was possible to achieve by placing the rifle's magazine well at the butt of the rifle.

Another innovation in the TKB-022 series was the discharge of spent cartridge casings forward, which solved the problem of shooting from the left shoulder. Grinkevich recalled that this innovation would be used in a 21st century Belgian design –the FN2000.

Old Warrior: 60 Years On, Russia's Tu-95 Bomber Still Goes Strong
"Overall, according to available estimates (the official results of the tests have yet to be published), Korobov's rifles boasted characteristics similar to those of the AKM, but were far superior in the area of compactness."

In the mid-1960s, well-known small-arms designer Nikolai Afanasyev developed his own bullpup design – the TKB-011, borrowing engineering solutions first pioneered by Korobov, including the overall layout, materials, and the cartridge ejection system. 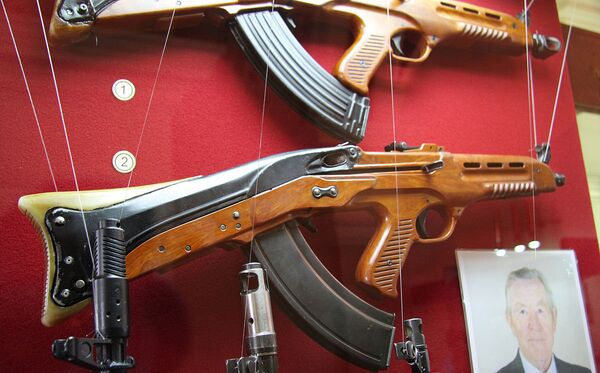 Grinkevich wrote: "[The TKB-011] had a very unusual appearance: the front and rear sections of the receiver were designed at an angle to one another."

The journalist wrote that for one reason or another, Korobov and Afanasyev's bullpup designs of the 1960s did not go past the prototype stage. According to military historians, it's difficult to say why this was the case – most of the designs remain secret, and openly available information on their testing is very limited.

A Lousy Shot: Ukrainian Army Complains About US-Made Shoddy Cartridges
As far as the TKB-022PM is concerned, Grinkevich suggested that its unusual center of gravity toward the rear of the rifle was perceived as a problem by the Army. As for the TKB-022P, the journalist noted that magazine feed's placement near the trigger is obviously a dubious ergonomic solution. "Finally, the general problem of bullpup designs is their short sight, which has a negative effect on accuracy. It is no coincidence that the Steyer AUG features an integrated telescopic sight."

The Soviet military's conservative appraisals regarding steel vs. plastics was likely another reason for the designs' shelving, the journalist noted, with planners concerned not only about the guns' properties in rugged combat conditions, but also their ability to withstand decades of storage in cold warehouses. All in all, there may have been many reasons given, but the potential advantages of the rifles did not seem able to withstand the obvious downsides.

Also starting in the 1960s, Soviet engineers would begin to keep a close eye on the work of their US counterparts, and the latters' attempts to increase the efficiency of small-arms weapons. In the late 1950s, the US launched its Special Purpose Individual Weapon (SPIW) program, a series of projects aimed at creating a workable flechette-firing rifle which would fire bursts at an extremely high firing rate, and potentially allow for fire featuring controlled dispersion.

Looking to keep up with the Americans, Soviet engineers also conducted experiments to create rifles with a very high rate of fire, but they used traditional 7.62x39-mm bullets. In 1962, designers created a prototype called Device 3B, out of which the TKB-059 three-barrel bullpup assault rifle would emerge.

Describing the unusual-looking weapon, Grinkevich suggested that "externally, it resembled an anti-aircraft machine gun, only smaller in size. Firing was conducted either in bursts, or bursts of three rounds. The rate of fire reached 1,800 rounds per minute."

According to available information, the TKB-059 made it through to the state testing stage, and showed very high accuracy, but after that the triple-barrel experiment mysteriously ended.

The Assault Rifle of the Future

When the military tasked designers to create a new assault rifle to go with the new, smaller, lighter 5.45x39-mm cartridge in the early 1970s, Kalashnikov went to work on a project that would eventually become known as the AK-74. The successor to the AK-47 would gradually go on to replace it in both the Soviet Army and those of its allies.

The AK-74's successor, the Abakan AN-94, also had its origins in the USSR, although production would begin only in the 1990s, several years after the Soviet Union's collapse. According to Grinkevich, the Abakan would become the last "and most ambitious Soviet automatic rifle program. Within its framework were plans to create a fundamentally new weapon at least 200-250% more accurate and precise than the AK-74." 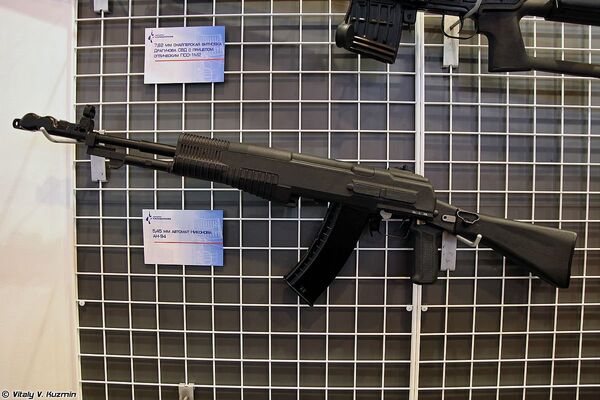 The AN-94 Abakan assault rifle, first produced in post-Soviet Russia, but whose development began in the early 1980s in the Soviet Union
© Photo : Vitaly V. Kuzmin

By timing, the Abakan, development of which began in the early 1980s, approximately coincided with the US's Advanced Combat Rifle (ACR) program, which had a similar purpose – to double the efficiency of the M16.

Grinkevich explained that "both programs' de facto goal was to create an [assault] weapon of the future, but the Soviets were a little more conservative in their ambitions. Where…[US designers] began actively experimenting with caseless bullets and flechette ammo, Soviet designers were presented with restrictions from the very start: their 'miracle weapon' would have to work using the existing 5.45x39-mm cartridges."

Ceasefire? Be Damned! Poroshenko Sends Soviet T-80 Tanks to Donbass
The Abakan program would eventually result in the creation of the AN-94, whose features include delayed recoil and extremely high accuracy for two round bursts hitting close together thanks to its rapid 1,800-2,000 round per minute rate of fire.

Alongside the AN-94, named after chief designer Gennady Nikonov, another project to create the USSR's next-gen assault rifle came from Igor Strechkin, who developed the TKB-0146, another bullpup design. One of the major features of Strechkin's design was its mechanism releasing spent shell casings through a special hatch near the gun's pistol grip, allowing a user to fire from his left shoulder. 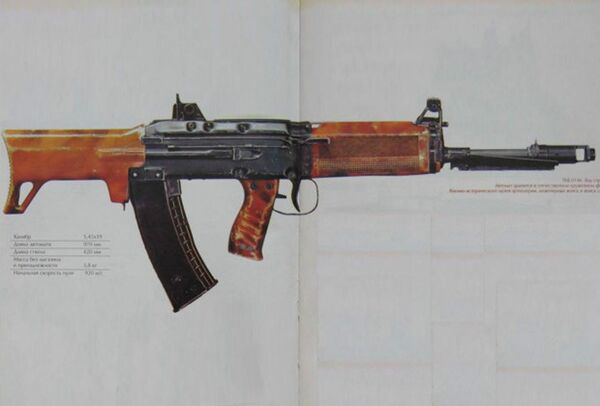 Nikonov too experimented with bullpups, creating the NA-2 and NA-4 designs in the early 1980s, which incorporated the delayed recoil technology eventually adapted on the AN-94. 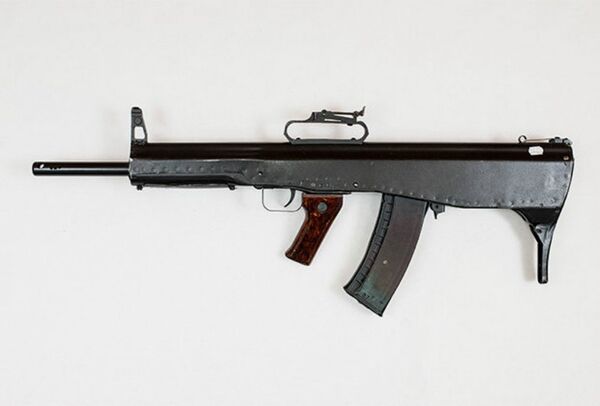 Ultimately, Grinkevich noted, "the American Advanced Combat Rifle program ended up being a dead-end. In Russia, the AN-94 was formally adopted into service by the military, but the gun was raw, and there was no drive to engage in the necessary fine-tuning in the 1990s," as the country lay in ruins.

Russia's 1st Tank Army Receives New Batch of Modernized T-72B3 Tanks
"Since then, the military's priorities changed. It turned out that efficiency of fire could be improved through more sophisticated sights and ergonomics."

It was eventually decided "that spending a great deal of money to develop, test and release obviously more expensive and sophisticated weapons was questionable, if the prospective gains were not immediately obvious."