China's Plan for New World Order: What Role Does It Leave to Russia? 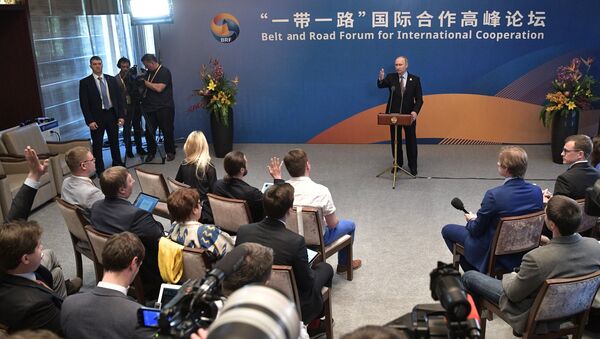 © Sputnik / Aleksey Nikolskyi
/
Go to the photo bank
Subscribe
On Monday, The Belt and Road Forum for International Cooperation wrapped up in China's capital of Beijing. Alexei Maslov, one of the leading Russian scholars and expert in East Asian studies, talked to Sputnik about what the summit achieved and the true aims of China's ambitious One Belt, One Road project.

Russia Plays Major Part in Turning China's One Belt, One Road Into Megaproject
China's most ambitious project, known as One Belt, One Road, is seen by many as purely an economic and trade initiative, concerned with huge infrastructure projects, mostly around transport and energy: roads, bridges, gas pipelines, ports, railways, and power plants.

Professor Alexei Maslov, Head of the School of Asian Studies at Russia's Higher School of Economics and Director of the Centre for Chinese Strategic Studies however explained what China's real purpose is with the project.

"Apart from the purely economic, the idea initially had another side. It is usually referred to as geo-strategic, however the world 'civilizational' better fits here, even though China tries not to show it off," reads Professor Maslov's analytical article for Sputnik.

The core of the project, he further explains, is that China wants to play a key role in the global world which will follow new rules, and where countries will have new roles.

The One Belt, One Road initiative, which China proposed in 2013, is a matrix of traditional Chinese or, to put it more broadly, of Asian political perception.

India, Japan to Launch Their Rival to China's OBOR
Professor Maslov further notes that the project does not have a clear plan, no clear parameters, calculations of expenses, pay-off period or other operational costs. China only announced it is ready to invest into the project, providing no details on the payback period or what the national economies of the participating countries should do for it.

"The ambiguity of the initiative however guarantees its 'insubmersibility' – no one would be able to assess its success. It gives China the right to change the rules of the game depending on the situation," the expert explains.

China, he says, is now fleshing out the initiative by declaring long-existing projects to be part of it. He cites as an example the construction of the Padma Bridge in Bangladesh, which is expected to be opened in December 2018 as part of the project, and which was announced in 2010, long before the launch of the project. Or the construction of the partly operational China-Pakistan corridor which connects China's city of Kashgar with the Pakistani port city of Gwadar, which was launched in 2002.

The West is wondering what China needs these numerous unhurried annual discussions and conferences for, he says. The aim is evident: to see how the world is reacting to the idea to unite around China and its vision of a more open world, which will be accessible not only to those western countries who initially set up the rules of the modern world.

The Belt and Road Forum, Professor Maslov says, has become the first review of allies that China has gathered around itself, many of whom are holders of Beijing's grants.

Economic Corridor With Pakistan Helps China’s Stability, Energy Security
China, in turn, is trying to demonstrate that it is friendly to the world, it tries to give a new impulse to the participating countries without infringing upon their interests.

China says the project is open to everyone, the trick however is that one can join in only admitting China's leadership in reshaping the world order. There is no way for joint activities here, as there is simply no mechanism for them, the expert says.

The situation appears to be black and white: either join or reject, as, for example, the US, India and a number of European countries chose to.
However there is the third option – mutually supporting projects. This is what President Putin voiced at the Forum in Beijing by proposing cooperation within the One Belt, One Road by bringing such structures as the Eurasian Economic Union (EAEU), the Shanghai Cooperation Organization (SCO) and the Association of SouthEast Asian Nations (ASEAN) on board.

It sounds like an excellent idea, the expert says, however it does not suit China which is not interested in equal economic cooperation between the countries and organizations. For Beijing, it is an expansive geopolitical offensive on the world and all the spheres of activity.

China however regards Russia as a key strategic partner, Professor Maslov says, And not only because it is easier and cheaper to deliver goods through its territory. But because Russia is the only large partner of Beijing who is ready to take the risks of reshaping of the world order and not be a mere bit player in China's project.