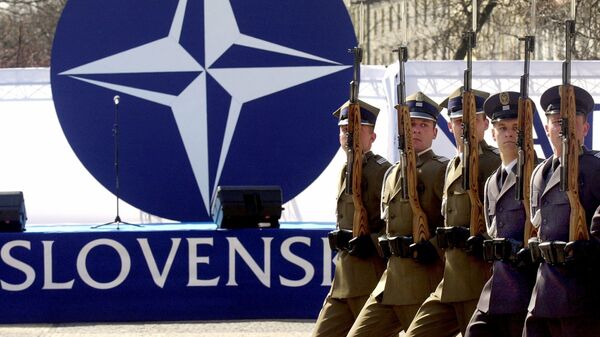 In an interview with Sputnik, Russian political analyst Anatoly Petrenko commented on the fact that more than 150,000 people have signed a petition calling for Slovakia's withdrawal from NATO; he said that it may set a precedent for other countries to follow.

NATO 'Obviously Preparing for a Conflict' on Its Eastern Border
More than 150,000 Slovak citizens from the necessary 350,000 have already signed up the petition demanding a referendum on their country's withdrawal from NATO, according to the Russian newspaper Izvestia. The referendum is expected to be held in the next two years.

The petition was initiated by the Eurosceptic right-wing People's Party – Our Slovakia, which was renamed Kotleba in November 2015, Izvestia reported. It is led by Marian Kotleba, the governor of the largest of Slovakia's eight regions.

The newspaper also referred to numerous protest rallies across Slovakia, during which people said "no" to foreign military bases and NATO military personnel on Slovak territory.

#Slovakia raised the issue of #Withdrawal from #NATO#Slovakia can become the first country to leave… https://t.co/RyjVnxKw1v#EU pic.twitter.com/vxuaD7CF6E

The protests and the petition could help Slovakia become the first country to leave NATO, which it officially joined in 2004, according to Izvestia.

Speaking to Sputnik, Russian political analyst Anatoly Petrenko praised the Kotleba Party's initiative, but warned that it has yet to be implemented.

"The most important thing is not a party's approval rating but an issue that this party raised for discussion. In this vein, I think the Kotleba Party managed to catch a wave, as surfers say. And the main thing for them now is to go ahead and not 'fall off' like rookie surfers," Petrenko said.

He added that there are many factors that may doom the party's petition. In particular, Petrenko did not rule out that attempts will be made to look for a so-called "Russian trace" in Kotleba's actions.

"They will certainly find it and they will quote a Slovak granny as saying that Russia allegedly gave her money so that she vote for Slovakia's withdrawal from NATO," Petrenko said.

In his opinion, it is very important how Slovak authorities will act if the petition collects the necessary number of signatures.

"The current Slovak leaders will reveal their true colors during decision-making on the matter. On the one hand, the constitution of Slovakia obliges them to take a decision depending on the results of this mini-referendum. On the other — as I understand it – those who make decisions in Slovakia are under strong pressure from NATO and pro-NATO structures," he added.

In other words, it is important whether the Slovak government will pay attention to what is happening now, according to Petrenko.

"After all, a historic moment is currently taking place. No matter how big or small Slovakia is, the country is a full-fledged member of NATO. And if a full-blown NATO member declares its withdrawal, and if succeeds in doing so, it will become a precedent for many [other countries]," Petrenko concluded.

Ildem explained the center will be staffed by 21 Slovakian personnel combined with 20 people from Bulgaria, Estonia, Hungary, Latvia, Lithuania, Poland and Romania.

"The message is clear: NATO is here in Slovakia. We are committed to defend your country and your people against any threat or act of aggression," he said.