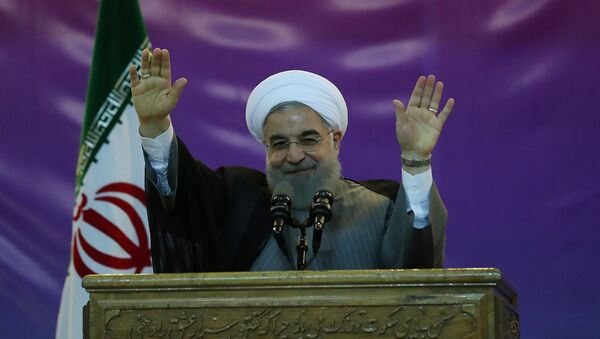 © REUTERS / President.ir/Handout
Subscribe
The office of French President Emmanuel Macron said that the reelection of Hassan Rouhani as Iranian President gives hope for the country's compliance with the nuclear deal.

MOSCOW (Sputnik) — The reelection of Hassan Rouhani as Iranian President gives hope for the country's compliance with the Joint Comprehensive Plan of Action (JCPOA) aimed at settlement of the Iranian nuclear issue, the office of French President Emmanuel Macron said in a statement.

"The reelection of President Rouhani strengthens the hope that his government will abide accurately by the historic agreement of July 14, 2015, which allowed to regulate through the diplomatic means the disagreements on the nuclear issue and to engage in the new stage of the relations between Iran and the international community. France, in turn, will continue to exercise vigilance over the strict implementation of [the agreement's] elements," the statement distributed by Macron's press office read.

In the document, the French president congratulated his Iranian counterpart on the reelection and expressed hope for the improvement of the economic, scientific and cultural ties between Tehran and Paris.

Rouhani’s Election to Ensure Predictability of Iran's Foreign Agenda – Lawmaker
Apart from this, Macron called on Iran to contribute to the settlement of the crises in the Middle East.

"Adhering to the development of the political dialogue with Iran, France reiterates the necessity of the diplomatic regulation of the conflicts in the Middle East and urges Iran to participate in it," the statement stressed.

Signed in 2015, JCPOA is effective since January 2016. The agreement between Iran and P5+1 countries (China, France, Russia, the United Kingdom, United States plus Germany) stipulates the suspension of the nuclear weapons development by Tehran in exchange for gradual lifting of the economic and diplomatic sanctions imposed on Iran by the Western countries.

Rouhani was reelected for the second term with 57 percent of votes at the election which took place in Iran on Friday.