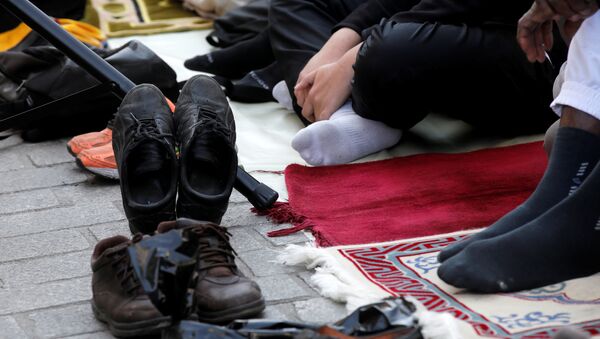 Muslims in Munich have called off a rally in favor of more mosques amid the threat of violence from far-right groups.

German Authorities Investigate Munich Art Gallery 'Infiltrated' by Scientology
Muslims in Munich have cancelled a planned demonstration with Friday prayers, which was to be held in the city's Marienplatz, due to security fears.

The rally and open-air prayer service was supposed to pressure the authorities into giving permission to build more mosques in Munich, where the Muslim population has increased significantly in recent years.

However, the demonstration's organizers have called off the protest after far-right groups were found to be planning a violent counter-demonstration.

"In the last few hours it has become known that in addition to hundreds of messages of goodwill and the enormous support of the Muslim community, the people of Munich and the media, right-wing populists and groups were also making plans," the rally's organizer Massi Popal wrote on Facebook last week.

"This is not just about danger to the lives of praying Muslims, but threatens all the participants at the site."

The organizers had been expecting about 200 Muslims to take part in the 1pm open prayer service, which aimed to draw attention to the lack of mosques in Munich.

The city's mosques are oversubscribed and several have been forced to close due to overcrowding during Friday prayers. Last month, a mosque on the Landwehrstrasse, an area also known as "Little Istanbul," had its lease terminated by the landlord, the Munich Theater Community, after local authorities complained that the crowds were too big and fire regulations were not observed, the Suddeutsche Zeitung reported.

Germany's Migrant Crisis: 'By 2060 There Will Be No Germany as We Know It'
In 2014, there were over 100,000 Muslims living in Munich, comprising 7.2 percent of the population. Since then, there has been an influx of refugees and migrants from predominantly Muslim countries and consequently more demand for Muslim prayer services.

According to the Die Welt newspaper, the problem of overcrowding is "clearly visible."

"Many of the over 100,000 Muslims living in Munich no longer know where to hold their Friday prayers. Since the refugee influx, their number has risen significantly in recent years. But there is no longer a mosque in Munich's old town since the last provisional prayer room of the Munich Forum for Islam was closed a few days ago."

"The crowds are too big. Observers said that there were about 400 Muslims inside the door, although the space is only meant for 120. This has led to many Muslims praying outside in the car park and listening to the Imam through the window."

"This is not the only prayer room that had to be closed for fire safety reasons. In recent months, three mosques have been shut down in Munich for the same reasons, whereupon the faithful moved to other houses of prayer. So-called backyard mosques emerged – which has left many Muslims feeling neglected," the newspaper explained.