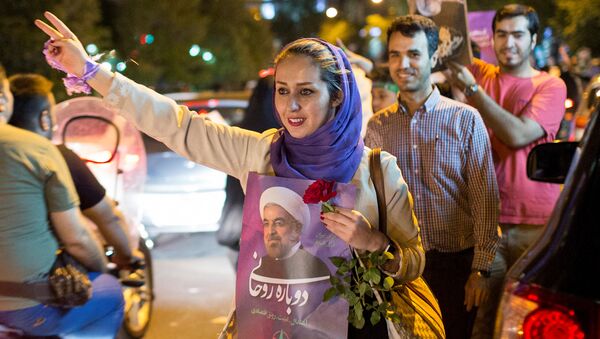 Mogherini Congratulates Iran's President Rouhani on Election Victory
MOSCOW (Sputnik) — The victory of the current Iranian President Hassan Rouhani in Friday’s presidential election will ensure predictability of Tehran’s actions both in relations with Russia and on the international arena, Leonid Slutsky, the chairman of the Russian State Duma International Affairs Committee, said on Saturday.

"The victory of Hassan Rouhani in the presidential election is undoubtedly a good news. His re-election ensures predictability of Tehran’s actions both in relations with Russia and on the most touchy issues on the international agenda," Slutsky told reporters.

According to the lawmaker, during his first term in the office Rouhani acted as one of the main mediators in the Syrian settlements, and founded the format "in which Russia, Iran and Turkey became the guarantors of the ceasefire and signed the memorandum on creation of four safe zones in Syria."

"Iran remains an important partner in all these processes, and the re-election of its president secures their progress," Slutsky explained.

All Votes Counted: Iran's President Hassan Rouhani Re-Elected for Second Term
Chair of the Russian upper house of parliament Foreign Affairs Committee Konstantin Kosachev also stressed the importance of Rouhani’s re-election, calling it a "good sign both for the country and for the world." According to Kosachev, Rouhani knows how to make agreements and aims for them, which is "a good signal for the whole unstable region and for Russia."

On Friday, Rouhani was re-elected for a second term with 57 percent of the votes.