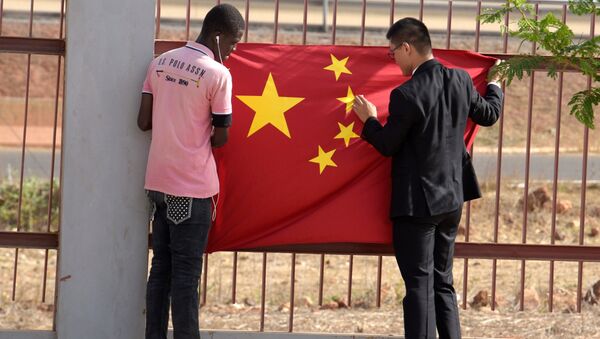 China Ramps Up 'Railway Diplomacy' in Africa Seeking Power Projection
Between May 19 and May 23, Chinese Foreign Minister Wang Yi is due to visit Mauritania, Cape Verde, Mali and Cote d'Ivoire, in what experts said had become Yi's second African tour since the beginning of this year.

In January, he paid visits to Madagascar, Zambia, Tanzania, the Republic of the Congo and Nigeria.

Commenting on this, Russian expert Dmitry Bondarenko pointed to China's persistent push to increase its clout all across Africa, irrespective of the various local political regimes.

He said that in the past few years, "China has actively tried to drive France out of West Africa, which is rich in natural resources, but very complex in terms of political stability."

"The strengthening of an African trend in Chinese diplomacy has already become part of Beijing's common push for assertiveness in Africa," he pointed out.

Bondarenko predicted that first and foremost, China will promote its economic interests in Africa given that Cape Verde, for example, is rich in fish, while in Cote d'Ivoire there are plenty of natural resources.

"In this vein, diplomacy is tasked with providing political support to China's assertiveness in Africa," he added.

Petrenko was echoed by Chinese political analyst Jia Lieying, who told Sputnik that "Foreign Minister Wang Yi's new mission to Africa in 2017 indicates the relevance of this continent for Chinese diplomacy."

"First of all, all the African countries are developing ones, and China is the largest developing country in the world," Laying said, referring to "very close ties between them".

"In addition, China and the African countries are united by mutual support in the fight against colonialism and are on the road to independence. After most of the countries in Africa gained independence in the 1960s, they actively joined many international organizations," the Chinese expert said.

According to him, all this "changed the architecture of various international institutions, including the UN, the composition of which was consistently replenished by developing countries."

"It, in turn, determined an important trend in the development of the UN, while also providing exceptional support to China in implementing its role in this organization," Laying said.

"From a strategic point of view, China stimulates regional development, including through the promotion of the 'one belt, one road' concept.  A recent Silk Road forum on cooperation in Beijing also brought progress in most areas of this project. The African countries are a favorable region for the Silk Road, with a lot of projects already being implemented there," he concluded.

Experts, meanwhile, pointed to the fact that on Africa's western coast, the port infrastructure is less developed that in the continent's east.

Building Ties: China Calls on African Nations to Join New Silk Road Project
That is why, during his current tour of Africa, the Chinese Foreign Minister will most likely lobby Beijing's maritime interests on the Atlantic coast of Africa politically.

At the same time, apart from Namibia, China has practically no other full-fledged points capable of meeting its naval forces' growing demands during protracted missions.

So it is safe to assume that threading Africa's western coast with "a string of pearls" is probably set to become a high-priority long-term task for China, experts said.