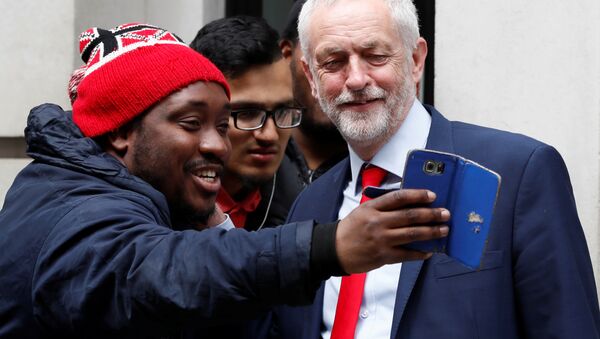 © REUTERS / Stefan Wermuth
Subscribe
Since he was elected to be the leader of the Labour Party, Jeremy Corbyn has been considered as more left-wing than many of his recent predecessors. Unsurprisingly, many policies which he has previously advocated have been formally included in the Labour Party's 2017 election manifesto.

This has further differentiated Labour's economic stance from its rivals, including the Liberal Democrats and the ruling Conservative Party.

"But bear in mind we've had two weeks in order to prepare all of these policy issues because of the speed in which the election has been called. I accept the challenge. We've produced I think a very well thought out and very credible manifesto in a very short space of time. I think we deserve some credit for that, actually," Jeremy Corbyn said, discussing how his party had to work quickly to formulate a cluster of concrete policies in a short space of time.

Labour's manifesto pledged to nationalize Britain's railways, build around 100,000 "affordable" properties each year, and scrap tuition fees. Labour insisted that such initiatives would not be funded by borrowing, but by increases in corporation tax, and other means instead.

Read our manifesto to find out what a fresh start with a Labour government will look like ↓ https://t.co/YeRUNSwNVq

However, Prime Minister Theresa May was skeptical, and warned that "Labour's sums don't add up."

Although tuition fees have risen sharply over the past decade, record numbers of students are going to university. Therefore, it seems that higher tuition fees, of up to £9,250 per year, haven't acted as a significant disincentive to going to university. This is probably because of the affordable repayment plans — students are only required to pay back their tuition loan if they earn £21,000 per year or more.

Furthermore, it is likely to encourage tax avoidance, especially by multinational corporations (MNCs), who can potentially utilize transfer pricing to reduce their UK tax bill.

On a separate note, higher levels of corporation tax could make UK businesses less internationally competitive, while also potentially discouraging firms from operating in the UK.

The negative impacts of Corbyn's fiscal policies would be accentuated by Brexit, as higher levels of taxation could be the "last straw," pushing firms outside of the UK.

"What we see is actually these policies, they are not sensible economic policies and would actually damage our economy," PM Theresa May warned.

On the issue of Brexit, it should also be noted that the Labour manifesto stated that an immediate guarantee of the status of EU nationals in the UK would be issued, and the party would refuse to leave the EU without a deal in place (a "hard Brexit would be avoided at all costs.")

Although Labour's more clearly defined and differentiated policies outlined in its recently published manifesto could result in a better performance in the upcoming June 8 general election, relative to prior efforts, their overall stance is likely to harm the UK economy, while putting the UK in a weaker position to cope with Brexit.