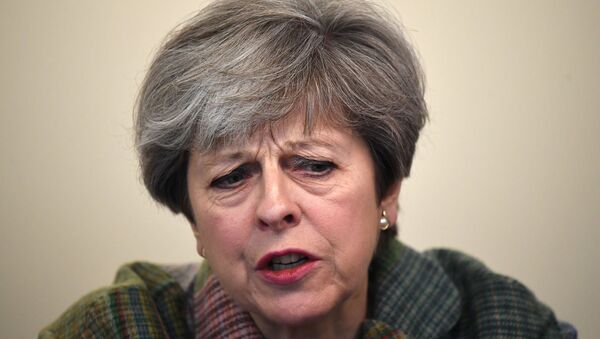 © REUTERS / Justin Tallis
Subscribe
International
India
Africa
The Conservative manifesto contains a dedicated section on the government’s commitment to "defeating extremism" – despite having struggled for many years to legally characterize the term, and recent admissions from Home Secretary Amber Rudd that finalizing a binding definition had proved impossible.

Plans for a Counter Extremism Bill were first announced in 2015, and included in the Queen's Speech the subsequent May, but the proposals were quietly put on hold — largely due to a July 2016 Joint Committee on Human Rights report. It concluded there was no usable legal definition of extremism, and it was "far from clear" what legal powers there should be, if any, to combat it.

The UK's Joint Committee on Human Rights (JCHR) has published its report on #Prevent & counter-extremism. https://t.co/G8SiWfqjnB

Moreover it urged ministers to "tread carefully" when trying to identify one, as current definitions risked undermining relations with Muslim communities due to their myopic focus on Islam.

The #torymanifesto calls out Islamic extremism but no mention of far-right extremism (now responsible for huge chunk of security referrals) pic.twitter.com/GhGLLANh8T

Then, the government defined extremism as "the vocal or active opposition to [the UK's] fundamental values," including democracy, the rule of law, individual liberty and the mutual respect and tolerance of different faiths and beliefs. However, such a definition posed an obvious problem — if an individual opposed Judaism on the basis it regarded women as subservient, or Catholicism due to its view of homosexuality as a sin, they would be classed as an extremist.

In March, Rudd wrote to Harriet Harman, Joint Committee on Human Rights Chair, admitting a definition still remained elusive, and the government's failure in this regard had in fact stalled work on fighting extremism.

"As your committee report makes clear, this policy area raises complex issues relating to freedom of speech and the importance of having a clear legal definition of extremism. These are issues that my department continues to consider and, as you know, we have committed to a full consultation on any new legislation before it is introduced," Rudd said.

Our manifesto offers a clear plan to meet the big challenges we face together, through Brexit and beyond. pic.twitter.com/mpOAOmKVj2

Despite these frustrated efforts, the Conservative manifesto pledges to create a commission to "identify examples of extremism" and "expose them" — perhaps a tall order if no working definition of the term is in operation, although it's evident from the pledge's wording government crosshairs are trained on a very specific extremist group.

"Extremism, especially Islamist extremism, strips some British people, especially women, of the freedoms they should enjoy, undermines the cohesion of our society and can fuel violence. To defeat extremism, we need to learn from how civil society and the state took on racism in the twentieth century…"

Tories have pledged to also continue w/ the Prevent agenda while other main parties pledged to abolish the controversial policy. pic.twitter.com/B4BFn5Qkeh

​Some may take issue with this singular focus on Islamist extremism, given Europol data suggests Islamists were responsible for 0.7 percent of terror attacks across Europe between 2006 — 2013. Nonetheless, this is in keeping with the UK's habit of generally prosecuting non-Muslim terrorists under non-terrorist laws, such as the murderer of Jo Cox MP.

Moreover, the pledge states the government would support "public sector and civil society in identifying extremists" if re-elected, suggesting it will continue to pursue the controversial Prevent strategy, which legally obligates public sector bodies to report any individual suspected of having extremist sympathies.

​Dr. Fahid Qurashi, a lecturer in Criminology at Canterbury Christchurch University, previously told Sputnik the Prevent strategy is infected with an Islamophobic bent.

For their part, the Labour and Liberal Democrat manifestos both pledge to either review Britain's counterterrorism and counter extremism policies, or abolish them outright in places.