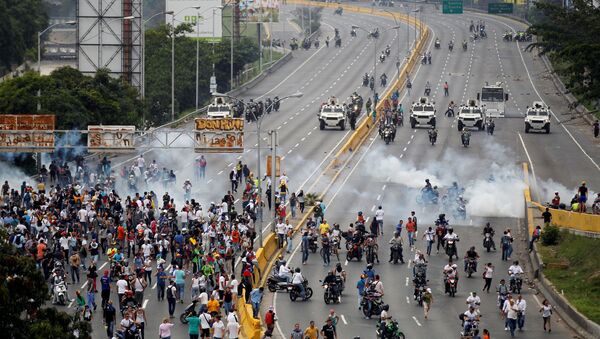 More than 50 people were injured in clashes between security forces and critics of the Venezuelan government in the nation’s capital Caracas.

US Adds 8 Individuals to Venezuela Sanctions List
MEXICO CITY, May 19 (Sputnik) — More than 50 people were injured Thursday in clashes between security forces and critics of the Venezuelan government in the nation’s capital Caracas, local media reported.

Gerardo Blyde, the governor of the Baruta municipality in Caracas, said 34 people had been admitted to health centers after violence erupted on a major highway, according to the Nacional news outlet.

Two of those hurt in clashes with National Guard forces suffered facial injuries, Blyde said, adding there were no severely wounded. Twenty-four people were brought to clinics in the Chacao municipality.

A brawl reportedly broke out after a crowd of people unhappy with President Nicolas Maduro marched on the Interior Ministry to demand end of attacks on demonstrators.

Venezuela’s opposition called people to the streets in early April after the Supreme Court took over powers from the opposition-controlled National Assembly. The decision was reversed days later.