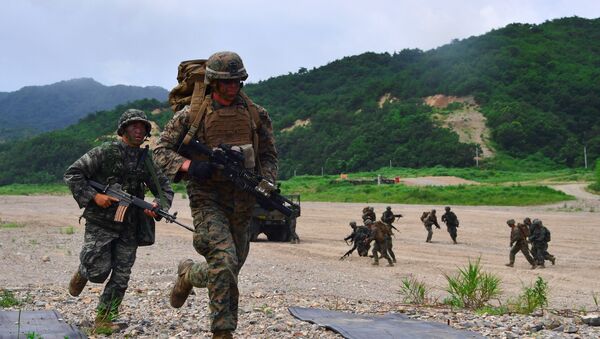 US Army forces carried out the "Warrior Strike 7" exercise at the Rodriguez Live Fire Complex near the inter-Korean border and north of Seoul at Camp Stanley in Euijeongbu.

The 2nd Infantry Division posted to Facebook that, "The exercise is designed to enhance the battalions' skills in counter-WMD operations," calling it the first such drill to be conducted with a South Korean vessel, the warship Dokdo.

With the assistance of South Korean soldiers, US troops on board a helicopter practiced infiltrating a mock enemy facility to develop their capacity to speedily disable a WMD, according to South Korea’s Yonhap News Agency.

The drills come days after North Korea conducted what some analysts consider its most successful missile launch to date, one which North Korean media claims expanded its missiles’ capability to carry a nuclear warhead and placed the US mainland within its striking range.

The Democratic People’s Republic of Korea (DPRK) has also begun preparing for a cruise missile attack from the US following last month’s strike against a Syrian government air base.

Troops from the Korean People’s Army were instructed to protect their gallery positions by replacing stone walls with sand-filled gunny sacks, as the fragments left from stone walls smashed by projectiles may cause casualties.

US President Donald Trump told Reuters in late April, "There is a chance that we could end up having a major, major conflict with North Korea. Absolutely." He added that Washington would “"love to solve things diplomatically but it's very difficult."

Trump has also said that he would be willing to meet with North Korean leader Kim Jong-un under unspecified circumstances.

There are roughly 28,500 American soldiers currently stationed in South Korea.