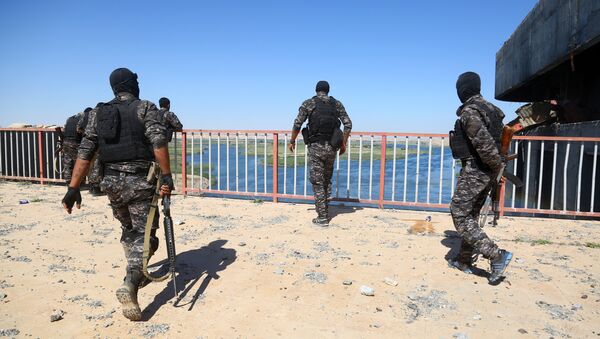 The US opt for cooperation with the Syrian Kurds in its anti-terrorism efforts, told Sputnik on Thursday.

Turkey Will Respond to Attacks by Syrian Kurds Without Warning US – Erdogan
MOSCOW (Sputnik) — Washington is choosing to cooperate with the Syrian Kurds rather than with Turkish forces in its anti-terrorism efforts as Ankara has not been conducting its fight against terrorists properly and in line with US interests in Syria, Xosawi Bebekir, Iraqi Kurdistan representative to Russia and the Commonwealth of Independent States, told Sputnik on Thursday.

Earlier in the day, Turkish President Recep Tayyip Erdogan said Ankara would not participate in the operation to retake the Syrian city of Raqqa from Daesh (banned in Russia) terrorist group because the United States planned to involve Syrian Kurdish militia People's Protection Units (YPG) in it.

"The United States relies on the self-defense forces of the Syrian Kurds in its fight against the Islamic State as their interests coincide in this matter. The United States could have relied on Turkey's support in the fight against the Daesh, but it [Ankara] does not do it in a benefiting way and its interests do not always coincide with US interests on the Syrian issue," Bebekir said.

On Tuesday, US President Donald Trump received Erdogan at the White House to discuss the Kurdish issue among other topics. This matter is particularly relevant, as earlier this month Trump approved a plan to arm the YPG in order to intensify the fight against terrorists, despite Turkey's objections.

Washington 'Won't Stop Supporting' Syrian Kurds Despite Erdogan's Efforts
The US leader was dodging Erdogan’s criticism over the Kurdish issue during the meeting to retain good relations with both parties, the Iraqi Kurdish representative argued.

"Apparently, the United States maintains a balance between Turkey and the Syrian Kurds. Perhaps that is why Trump confined himself to general comments during the meeting with Erdogan," Bebekir added.

Ankara considers the YPG to be affiliated with the Kurdistan Workers' Party (PKK), which is listed as a terror group in Turkey, the United States and the European Union. However, the Kurdish-led Syrian Democratic Forces (SDF) militia alliance, which includes the YPG, have been receiving support from the United States in fighting Daesh terrorists in Syria.

Since taking the office, US President Donald Trump has been very critical of Syrian President Bashar Assad, calling the Syrian leader "an animal" and imposing new sanctions targeting the Syrian government and its supporters in late April in response to the alleged April 4 chemical weapon attack in Idlib. The Syrian government denied having chemical weapons.