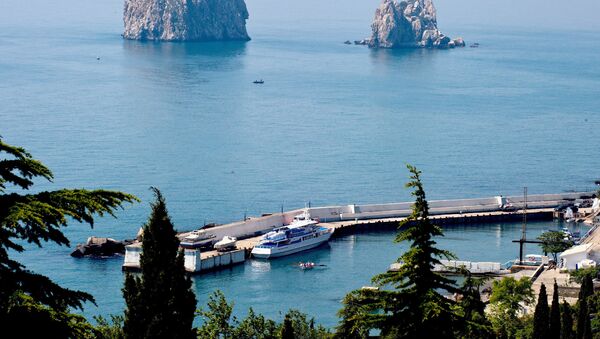 A US delegation led by the president of the Center for Citizen Initiatives, Sharon Tennison, has arrived to the international children center Artek in Crimea, Boris Verbenko, an adviser to the camp's director, told Sputnik on Thursday.

Five Facts About Legendary Soviet 'Artek' Summer Camp in Crimea
SIMFEROPOL (Sputnik) — In Soviet times, Artek was a landmark of the USSR. The camp was visited by children and adults from all over the world, including prominent people, like for example Indira Gandhi. Cosmonauts and astronauts, musicians and actors have always been very welcome there too. Yuri Gagarin even presented his space suit to the camp's museum.

Today, Artek is a huge complex consisting of ten camps, which can simultaneously host 3,600 children (and up to 30,000 per year). The length of its coastline is 7 kilometers, and the total size of the territory, including all farms and protected areas reaches 208 hectares.

"The delegation has arrived to our camp. We are planning to show it two main locations. The first one is to show what has been done in the center over the last three years and the second is to meet with children from the United States, who are staying within the fifth camp session," Verbenko said.

Verbenko added that the program of the visit would be two hours long.

Tennison's first visit to Crimea took place last June as part of a delegation comprising around 10 US public figures, former officials and professors.