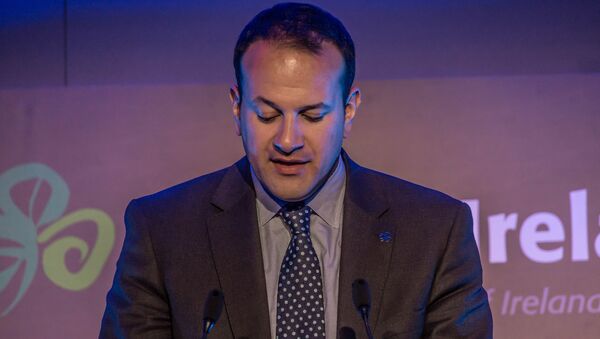 CC BY 2.0 / William Murphy / Leo Varadkar
Subscribe
The Irish Prime Minister, Enda Kenny, announced yesterday he was stepping down as leader of the ruling Fine Gael party. The favorite to take over is an openly gay man with an Indian surname. It shows how much the Republic of Ireland has changed in recent years.

How times have changed in the Republic of Ireland. As late as 1993 it was a strictly Roman Catholic state where homosexual acts were illegal and the population was overwhelmingly white and ethnically Celtic.

Fast forward to today and the favorite to be elected leader of Fine Gael and therefore the Taoiseach (Prime Minister) is Leo Varadkar, an openly gay man whose father was born in Mumbai.

His main challenger is expected to be Simon Coveney, the Housing Minister, who is from a so-called "merchant prince" family in the city of Cork.

"It's a straight fight between the two of them. Leo is a well-spoken, slick doctor from Dublin, he was Ireland's first gay minister. Coveney is a bit shy, his father was a minister and he's from Cork so it's a bit of a Dublin/Cork battle," Irish journalist Cathy Grieve told Sputnik.

Kenny, who had led the party since 2002, stepped down as leader of Fine Gael party on Wednesday, May 17 and Varadkar's leadership bid has been supported by Catherine Noone, Deputy Leader of the Irish Senate, and a number of other Fine Gael politicians.

Varadkar's father, Ashok, moved to England in the 1960s, met his mother Miriam, a nurse, and then in 1973 moved to Dublin.

For a year civil war raged in the south between the Irish Free State, led by Michael Collins, and the remainder of the IRA which refused to accept the division of Ireland.

Fine Gael, which means "Tribe of the Irish" in the Gaelic language, was eventually formed in 1933 out of a number of parties on the Free State side.

People in Dublin, if not in the countryside, began to notice more and more immigrants and also accepted changing social mores.

Homosexual acts were legalized in 1993 and in 2015 Ireland voted in favor of same-sex marriage.

"Is Ireland ready for its first gay Taoiseach? For some people yes, absolutely. We have moved gigantic steps as we should in this modern day but some people, and not just old people, are not ready for that," Grieve told Sputnik.

Bernard Purcell, the editor of the Irish World, told Sputnik being gay might actually help Varadkar's chances of being chosen as party leader.

"It was an open secret for a long time but he came out at the time of the equality referendum and it certainly didn't hurt him… he is box office and he has novelty value," Purcell told Sputnik.

Purcell said the new Taoiseach would find a number of pressing items in their in-tray, most noticeably how to deal with the implications of Brexit on the Irish Republic.

Many Fine Gael members are conservative farmers who hold old-fashioned views and may prefer Coveney to Varadkar.

But Grieve told Sputnik that "nobody had batted an eyelid" about him being half-Indian.

Varadkar, who had spells as Transport and Health Ministers, is currently Minister for Social Protection but has been criticized for what some believe has been a vendetta against poor people on benefits.

"Leo is very polished with a high IQ, very bright. But he lacks some social skills and he can't work a room," Grieve said.

She said a telling factor could be Fianna Fail leader Micheal Martin's preference.

Fianna Fail is currently propping up Fine Gael in power, but if Martin makes it known he cannot work with Varadkar and would force another election, it may swing the vote Coveney's way, says Grieve.